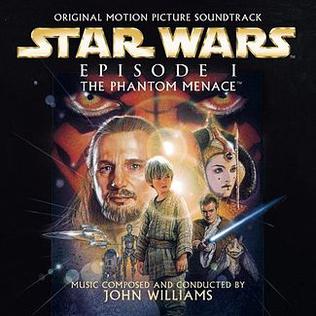 The long-awaited prequels started to hit theaters in 1999 and immediately fans were hit with great disappointment. The charm of the original trilogy is missing from Phantom Menace, which suffers from a confusing and boring plot about trade and taxation, Jar Jar Binks, and characters that are just not interesting. The question for the next several reviews is: did John Williams new scores fail to live up to the originals as well?

First here are the new themes that Williams created.

Anakin: This innocent theme is for the child version of Anakin, only resurfacing once in the next two installments. It’s pretty good, and the best part is that the end references a piece of Vader’s theme without sounding villainous. It gets its own concert arrangement.

Darth Maul: Darth Maul gets a whispery Sanskrit chant which can actually get pretty creepy.

Duel of the Fates: The most popular theme from prequels, this is a mix of racing notes and grand choral chanting in Sanskrit. It appears in the final act of the film, with the choral bombast occurring during the lightsaber duel. Actually, the prequels were noted for using much more choir. The original trilogy had the low male voices for the Emperor and that was about it.

Jar Jar Binks: This is a goofy, comedic motif which is okay, but I’m not excited when it comes on. It does suffer from being associated with such an awful character. It is appropriately introduced in “Jar Jar’s Introduction”.

Qui-Gon Jinn: Liam Neeson’s Qui-Gon gets a very noble theme which doesn’t appear too much, and not even on the original album release.

Shmi: Shmi has her own little motif. It’s mot notable appearance is in “Anakin is Free” on the two-disc set.

Trade Federation: The Trade Federation gets its own military march, showcased in “Droid Invasion”. It doesn’t appear a lot, but when it does it’s pretty awesome. It’s kind of sad that such an awesome theme accompanies the worst foot soldiers of Star Wars.

People were curious which themes would return from the original trilogy. The Main Theme graces the opening crawl and end credits per tradition, but otherwise gets just one brief statement in “Panaka and the Queen’s Protectors”. The Force theme appears much more often, as it’s a concept very much at the forefront of the prequels. Yoda and Darth Vader’s themes are referenced in “The High Council Meeting”. The Emperor’s theme appears too in scenes with Darth Sidious, who obviously is Palpatine in Sith guise.

The Phantom Menace soundtrack was released with over seventy minutes of score. Williams decided to release in what is a called a concert suite form. Basically, the music is not arranged as it is in the film and in many places two or three cues are spliced together. For some listeners this can get frustrating, wondering why the Trade Federation theme bookends the music from the fish chase scene or bits of Sanskrit chanting appears to slow down action cues. I find some of the edits to be a little annoying, as it makes the presentation feel jumbled at times, but in general this is a good listening experience. The only missing highlight is “Anakin is Free”.

Things kick off with the opening crawl and some stately music from the arrival on Coruscant scene, though it’s incorrectly titled “Arrival at Naboo”. Following are the concert arrangements of Duel of the Fates and Anakin’s Theme. Track five, “Sith Spacecraft and Droid Battle”, is an interesting highlight. It starts with sinister chanting and ominous percussion before breaking out into all-out action. If you listen closely you can hear that it’s a variation on Darth Vader’s theme!

The standout moments of the next few tracks are the pompous “Flag Parade” and the sinister “He is the Chosen One”. There’s not much else of note until track thirteen, “Panaka and the Queen’s Protectors”. This is rousing heroic piece which suddenly slows down towards the end with some slow percussion before picking up again for the finale.

After the aforementioned “Droid Invasion” is “Qui-Gon’s Noble End”, which kicks off with action music from a way earlier scene. After some haunting usage of Darth Maul’s motif a tragic rendition of Duel of the Fates breaks out. “Funeral” showcases yet another Sanskrit choir, this one a very mournful tune which would make a return for the ending of Revenge of the Sith.

The last track is “Augie’s Municipal Band”, which is actually an upbeat and happy version of the Emperor’s theme! This is largely accomplished by changing the last note to make it more uplifting, as well as children chanting in lieu of a sinister male chorus. The end credits is basically tracks 2 and 3 pasted together.

Overall, Phantom Menace, like most John Williams scores, has a lot of great music. But there’s actually quite a bit I don’t find interesting. Queen Amidala and Naboo Palace” isn’t terrible, but it’s not a track you’re going to go back to a lot. A lot of the action tracks not from the last act don’t have much in the way of references to themes and motifs, something which was always a great strength in the original trilogy. I think another problem that I have personally is that my impressions of a film can reflect on its score. When I hear music from Empire Strikes Back, I think about that movie’s wonderful moments. When I listen to this soundtrack, I think of a lot of bad and underwhelming moments. I just can’t get the same thrill I do with the original scores.

So does John Williams disappoint? He does maybe a little bit, but his music is still one of the few genuinely great things about the prequels,

Just a year later the Phantom Menace received a two-disc release, and is the only prequel score to have gotten one. It’s completely in chronological order and if there’s any music you wanted on the original release that wasn’t there, it’s here. “Anakin is Free” is the best one. It starts with Qui-Gon’s theme before a few minutes of amazing emotional music and then a statement of the Force theme. One little cue I really like is “Darth Sidious and Dart Maul”, which kicks off with an evil fanfare before going into the Emperor’s theme.

Listening to this album can actually be a little jarring during the final battle sequences, as they were re-edited in post production, meaning the music goes all over the place. Many of the tracks are also really short, making it hard to keep up with what track you’re on.

I think I actually prefer the original release. Some of the concert arrangements flow much better.