Skip to content
HomeSoundtrack Review: Revenge of the Sith 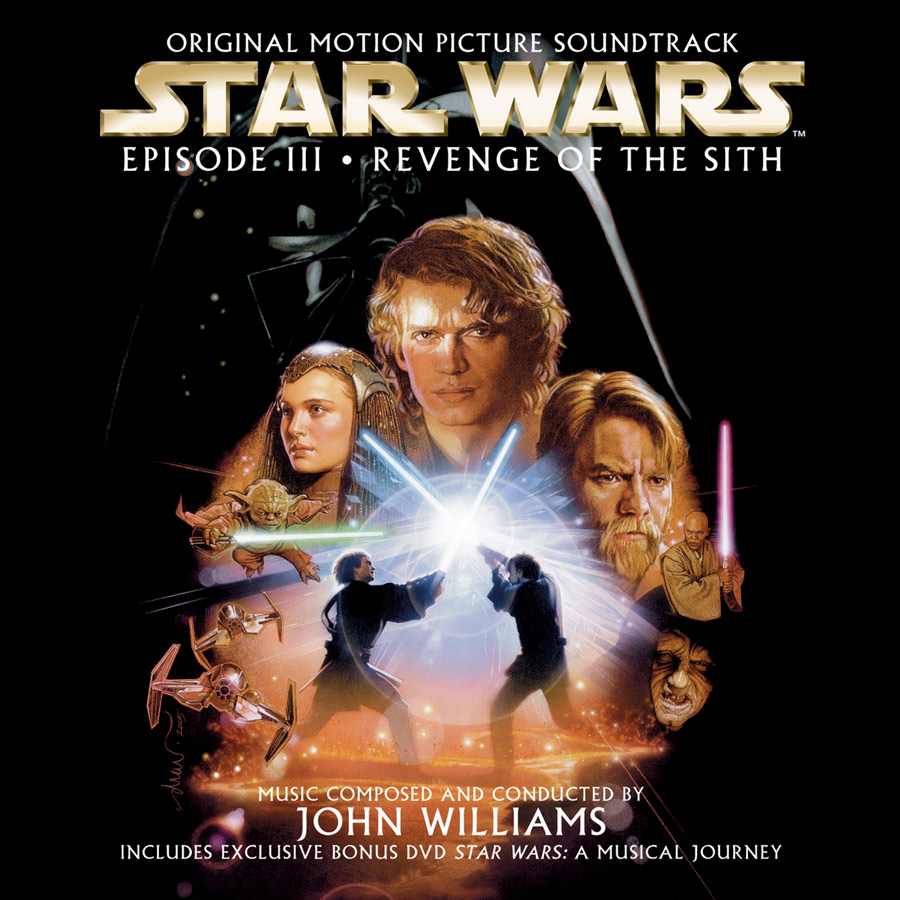 The conclusion to the misguided prequel trilogy is probably my favorite of the bunch. While the script still sucks and the acting still suffers from poor direction and lack of real sets in lieu of a blue screen, Revenge of the Sith focuses a lot on battles, which happen to be the one of the prequel trilogy’s only constant strengths. John Williams delivers a large epic score and the end result, while very good, seems to have missed the mark in a couple of areas.

Revenge of the Sith has little in the way of new themes, even more so on album.

Arrival: This stately motif appears after Anakin crash lands the Separatist warship and later on when Obi-Wan arrives at Utapau. It’s absent from the album.

Betrayal: Showcased in “Anakin’s Betrayal”, this mournful choral music accompanies the extermination of the Jedi and actually makes it a good scene. It speaks to the power of John Williams’ music, because honestly we don’t really know and love any of the Jedi being wiped out. It appears again right before the final lightsaber duel.

General Grievous: The other new theme on album is a pompous march for General Grievous, appearing most obviously in “Grievous Speaks to Lord Sidious”. Interestingly enough, his theme does not appear in the track that states his name.

There is one major disappointment which some fans had with the other two soundtracks, but here it matters more. That is the near-absence of themes from the original trilogy. Many expected the Imperial March to appear more often since Anakin becomes Darth Vader, but it appears only briefly, except in “Anakin vs. Obi-Wan”, where it’s just ripped from The Empire Strikes Back’s “Clash of Lightsabers”. The Emperor’s theme too is almost absent, even though he has a large presence in the movie. A few notes of his theme appear in “Enter Lord Vader”, but the action variation from his duel with Mace Windu is absent from the album. The Force theme is once again the only theme from the original trilogy to a make a significant contribution.

Likewise, the prequel trilogy’s themes seem to have been shoved out of the picture. From The Phantom Menace only a fanfare and the funeral motif return. “Across the Stars” from Attack of the Clones has a couple of gorgeous moments in “Anakin’s Dream”, appearing on melancholy strings near its opening. But even as Padme dies, this theme is absent, last appearing as a barely audible tune under wailing choir in “Padme’s Ruminations”.

But for all the thematic flaws, Revenge of the Sith still manages to thrill the listener. The first track features an amazing moment in which the Force theme is accompanied by a militaristic background. The cue is further helped by a pounding action section and a grand, sinister statement of Grievous’s theme. “Anakin’s Betrayal” is an emotional choral piece accompanying the betrayal and murder of the Jedi. Despite having no thematic connection to other tracks on the album, this piece still caused an emotional response in me as I watched made-for-action-figure Jedi characters sheepishly let themselves get killed in mere seconds, proving how good it is.

“General Grievous” is my favorite action cue, with a low-key buildup that leads into a furious brassy climax. “Palpatine’s Teachings” can either bore or intrigue you with over a minute of an eerie, droning choir, which end with a soft statement of the Imperial March. “Anakin’s Dark Deeds” has one of the best moments. The beginning sounds a little too ripped from Lord of the Rings, but as it nears its end it features a tragic melody followed by a dramatic villainous fanfare.

John Williams actually fails to create an appropriate end credit suite. The last track’s first half is amazing, with several well-thought references to the first movie’s themes to connect the two trilogies, plus a rendition of Princess Leia’s theme as the end credits start to roll. After another presentation of “Battle of the Heroes”, Williams is left with a choice: score a climax to the Star Wars movies as a whole or score an appropriate bridge between the two trilogies. He chooses the former, resulting in a rehashing of the concert version of “Throne Room & Finale”. It sounds good, but does not fit too well with the tragic apocalyptic material from the other tracks. It also is now rendered pointless thanks to Disney’s new crop of Star Wars movies.

John Williams’s arrangement of his music on album is also less than satisfactory. While not very chronologically correct, the music flows okay until the track “Anakin vs. Obi-Wan”. Tracks 9-11 actually play out in the exact reverse order of when they appear in the film, resulting in some personal frustration for me. This sequencing also completely shoves any action material out of the soundtrack’s last third. A reordering of the tracks is probably necessary for a better listening experience.

All in all, Revenge of the Sith has fantastic music, but Williams’s failure to use his themes more and some poor album production can result in a disappointing listening experience. However, fans might be pleased with an additional DVD disc which doesn’t affect the price. This disc features most of the concert arrangements set to montages of scenes from the movie to create the story of Star Wars.