Skip to content
HomeSoundtrack Review: Raiders of the Lost Ark

With Star Wars hearkening back to old-fashioned sci-fi pulps and serials, the Indiana Jones franchise is likewise based off of adventure serials and film from the 1930s-50s and in fact take place in that era. Created by Steven Spielberg and George Lucas, Raiders of the Lost Ark, the first Indiana Jones film, was a smash hit that cemented Harrison Ford as a movie star, furthered the popular use of Nazis as villains, and, as with almost every Spielberg movie, produced an amazing John Williams score. The Indiana Jones theme itself is one of the most recognizable pieces of movie music, and is often referred to as the Raiders March, after the first film it appeared in.

The Indiana Jones theme is actually two heroic themes that, at the insistence of Spielberg, were mashed together. More recognizable and hummed much more is the first part of the theme, which plays at the outset of “Raiders March”. It’s instantly catchy and is used much more than the second part. I’ve even heard some makeshift lyrics for it (“Indiana, Dr. Jones, Indiana, Dr. Jones, Jones, Jones”). The second part itself always begins the final statement of the theme in the end credits suites. What’s interesting about Indy’s theme is that it doesn’t make its first appearance until the end of the opening sequence in “Escape from Peru”.

Also considered to be part of the Raiders march is the love theme for Marion.  It first appears in the beginning of “Journey to Nepal” in a low-key manner, but shows its sweeping nature in “To Cairo”. I’d say it’s in my top ten love themes. It’s fullest performance outside of the end credits are at the end of “The Basket Chase” and “Marion’s Theme”. The third and final major theme is for the film’s artifact. Each of the Indiana Jones films has a major theme for the artifact in question and, in Raiders of the Lost Ark, this theme is of course for the Ark of the Covenant. It’s a heavily ominous tune often accompanied by uneasy whirring strings, emphasizing the divine terror that can arise from this object. It’s first major appearance is “The Map Room: Dawn”, which brings in a heavenly (but not in the lovely way) choir towards its climax. My personal favorite use of the theme is in “Miracle of the Ark”, where it builds into full on horror territory as its power is unleashed, before climaxing in a choral rendition and ending peacefully with Marion’s theme. The Ark theme is probably the best of the artifact themes. None of the others match its power and sense of the supernatural.

There are several other themes and motifs. There’s a basic artifact motif that appears as Indy approaches the Incan idol near the beginning and later on segues into the Ark theme in “The Map Room: Dawn”. There is a secondary adventure motif highlighted in “Indy Rides the Statue” that sounds like a permutation of the main theme. The Nazi music is appropriately militaristic. They have an aggressive theme that doesn’t appear until well into the second half of the movie, mainly in the action set pieces.

Raiders of the Lost Ark has had several album releases, so let’s go through them. 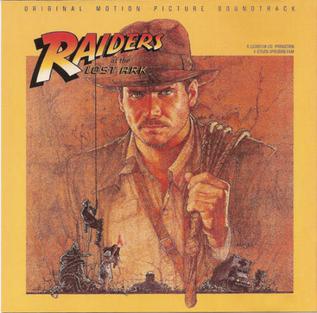 With the time constraints of a record album, Raiders received only a forty-minute release, with no double LP release like the first two Star Wars movies. It’s not as big as a problem here, since Star Wars scores are much larger in scope anyways.

The first track is “Raiders of the Lost Ark”, the end credits suite, while a streamlined presentation of Indy’s theme closes the album as “The Raiders March”. Personally, I think “The Raiders March” could have been replaced by another cue since it’s already inside the end credits suite, but I can see how in the pre-internet days someone might want a single track with just the theme. The second track is “Escape from Peru”, which despite its title is a pretty lighthearted piece with little sense of danger. “The Map Room: Dawn” showcases the Ark theme. “The Basket Game” is another light-hearted action cue, with its own little recurring motif. The highlight is the moment that accompanies the Cairo Swordsman. Not feeling well while filming, Harrison Ford suggested to Spielberg that instead of dueling the swordsman, maybe he should simply just pull out his gun and shoot him, thus creating one of the funniest anticlimaxes in cinematic history. For this scene, Williams gives the swordsman a bombastic trumpet motif before a few goofy notes lead to one pluck, coinciding with Indy gunning him down. “Basket Chase” does get serious towards the end, culminating in a tragic rendition of Marion’s theme.

“Desert Chase” is the action highlight of the score, an unrelenting action cue with many brassy statements of the Indiana Jones and Nazi themes. Towards the end the music gets deadly serious with a repeating seven-note motif that builds and builds until Indy finally gets the upper hand again with the Raiders March. The biggest flaw of this album is that, for some unexplained reason, Williams decided to excise about thirty seconds where the pounding seven-note motif starts. Perhaps he thought that taking out the bridge between the two parts of the cue would make for a more dramatic transition. “Marion’s Theme” combines the main love scene with “To Cairo”. I’ve already gone into “The Miracle of the Ark”.

Considering time limitations at the time, this is a great album. The only flaw is the edit of “Desert Chase”. 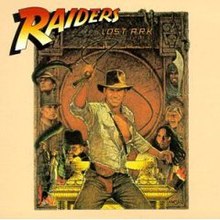 Raiders of the Lost Ark received an expanded release in 1995, being released on both CD and a double LP in a chronologically correct order. This time listeners are treated to the entire South American sequence, which is full of ominous cues punctuated by loud blasts every time an incident befalls Indy’s expedition.  The first great track missing from the original album release is “The Medallion”, which opens with an eerie rendition of the Ark theme before going into what I have to say is pure evil music for Gestapo agent Toht’s entrance. The entire sequence for Indy’s excavation for the Well of the Souls is present as well, though about five minutes was only available on the double LP release.

Another great track is “Airplane Fight”, for when Indy has a slugfest with a large German mechanic. Just as Indy’s momentum in the fight is always cut short, his theme is constantly being interrupted. This is the first cue within the film to feature the Nazi theme. Also to my delight, “Desert Chase” has its missing thirty seconds restored. Most of the final music not present on the original release is for the boat and sub scenes. The first half of “To the Nazi Hideout” is the highlight, opening with a grand rendition of Indy’s theme and turning to a travel cue with statements of the Nazi theme.

Overall, I would say this is the strongest of the three albums if only for the complete version of “Desert Chase”, which is one of my favorite action cues of all time.

With Indy’s return to the big screen for Kingdom of the Crystal Skull, Concord released a five-disc set, giving us the closest thing we have so far to complete scores for the Indiana Jones franchise. Already heavily expanded in 1995, Raiders of the Lost Ark doesn’t have much new to offer. There are three one-minute cues presented for the first time. “Washington Men/Indy’s Home” features the first actual appearances of the Ark and Marion themes. “Bad Dates” is a basic suspense track while “Indy Rides the Statue” features a small part of the music from the Well of the Souls escape scene. Most of the music that remains unreleased is from this scene. Frustratingly the producers use the original album edit of “Desert Chase”.

From the Fifth Disc

I’d rank Raiders of the Lost Ark as the number one Indiana Jones soundtrack. It’s consistently engaging, even its moments of low underscore. It’s got the best love and artifact themes of the series and action cues like “Desert Chase” are pure thrills.