Although Temple of Doom was another box office hit, critical reactions were heavily mixed and it obviously affected director Steven Spielberg enough that he spent a couple extra years on completing the Indiana Jones trilogy. He wanted to recapture more of the feeling of Raiders of the Lost Ark, resulting in the return of a couple supporting characters and the Nazis as the villains. Originally the third film was going to focus on Indiana Jones looking for fruit of immortality and the legendary Chinese character the Monkey King in the heart of Africa, but this was wisely replaced by a search for the Holy Grail with Indy’s own father, wonderfully played by Sean Connery, thrown into the mix.

John Williams of course returns with a lot of new themes. There are a couple of artifact themes this time around, both evoking a strong religious feeling, without any of the ominous feeling of the other movies as the healing power of Christ isn’t known for  zapping anybody who tries to use it. The first is the primary Grail theme, which debuts appears in the travel cue portion of “X Marks the Spot”. Most of its appearances were absent on the original album, but restored on the 2008 release. There’s a secondary Grail theme which is also used for Henry Jones Sr., Indy’s father (as evidenced by its use in Kingdom of the Crystal Skull). This warm theme makes its first appearance in “Ah, Rats!” after a statement of the primary theme and is heavily present in the film’s last cues. There’s also a small family motif which appears towards the beginning of “Canyon of the Crescent Moon” and in more loud fare in “Keeping Up with the Joneses”.

This time around there’s no love theme, but there is what I think is the strongest villain theme of the entire franchise. The Nazis get a bombastic little piece which like the primary Grail theme had most of its uses absent on the original album release. It’s strongest single performance is in “Brother of the Cruciform Sword”, but it’s most memorably used in “Scherzo for Motorcycle and Orchestra”. There’s also a couple of motifs for the opening sequence of the film, which shows Indy as a boy scout trying to take the Cross of Coronado from some gravediggers. The Cross of Coronado is represented by a little ditty with Spanish flair. The opening villain has an appropriately generic, sinister motif, something Snidely Whiplash would use. There’s an adventurous chase motif weaved in there as well. 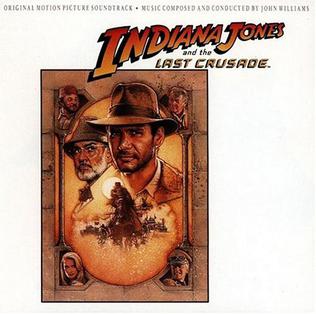 The original 1989 release was nearly an hour long. It opens with “Indy’s Very First Adventure”, which covers over half of the opening sequence’s material. “X Marks the Spot” introduces the Grail theme before low-key exploration music comes on. “Scherzo for Motorcycle and Orchestra” is the track that gets put on John Williams compilation albums, an exciting, racing piece that conveys both peril and light-heartedness at the same time, in the same vein as “Basket Chase” from Raiders. “Ah, Rats!” starts off as more exploration music before presenting the two Grail themes. It breaks out into a perilous action cue, leading to the wonderful “Escape from Venice”, another mix of peril and light-hearted adventure.

“No Ticket” is a humorous cue that seems to go on longer than it does in the film. “The Keeper of the Grail” starts off with some goofy material and ends a little slowly, but does have a pretty good presentation of the secondary Grail theme. “Keeping Up with the Joneses” is a great, fun track, but doesn’t appear in the movie. I suspect it originally played during the airplane sequence, which ended up being mostly unscored.

My favorite action cue is “Belly of the Steel Beast”, a concert arrangement which extends the opening music from the tank battle before seguing into its climax.  “Canyon of the Crescent Moon” is a decent piece, but the Grail theme used in the film must have been temp tracked in because it’s nowhere to be found here. “The Penitent Man Will Pass” weaves the primary Grail theme with some suspenseful music before breaking into a fanfare. “Finale & End Credits” runs over ten minutes long, with the end credits scene of course having the Raiders March, in addition to a reprise of “Scherzo for Motorcycle and Orchestra” and a concert arrangement of the secondary Grail theme.

The original album is okay. It does have the main highlights, but as usual there is plenty of great music missing.

A little less than twenty minutes was added on to the original album, which itself was re-arranged in chronological order. “Indy’s Very First Adventure” is now in its entirety, though unfortunately the producers decided to cut the last three minutes off and place it in its separate track (“The Boat Scene”). This really hurts the flow, as Indy’s theme is supposed to build right into “The Boat Scene”. “Journey to Austria” and “Father and Son Reunited” are just okay. “The Austrian Way” is much more interesting, the only piece of romantic music in the entire score, but played in a more seductive, femme fatale style.

“Alarm!” is frustratingly put right after “Scherzo for Motorcycle and Orchestra” which it’s supposed to precede. It also was for some reason split from “The Austrian Way” as “The Boat Scene” was from “Indy’s Very First Adventure”. Still, it’s a good track with the same chase motif from “Scherzo” and more of the Nazi theme. “On the Tank” is the last addition to the main album, the middle portion of the tank scene. It’s great, but I wish it was inserted back into the middle of “Belly of the Steel Beast” to give the full effect of the cue’s many twists and turns.

The fourth disc includes a further quarter hour of material, most of it centered around the Grail and Nazi themes. The highlight of these is “To the Blimp”, a sinister piece that builds into the Nazi theme. “Wrong Choice, Right Choice” has the rest of the film’s final music.

The expanded release is better, but riddled with some questionable editing (or lack thereof). Perhaps there were technical difficulties or contractual problems. I’ll still give it a higher rating though for giving us another half hour of the score.

From the Fifth Disc

Last Crusade is my favorite Indiana Jones movie, but it doesn’t have the best score. There is a considerable, but not excessive amount of material that’s not really that engaging. Raiders of the Lost Ark and Temple of Doom are consistently exciting to listen to. The themes themselves are still of the same high quality and there’s a lot more emotion to appreciate because of the presence of Indy’s father. I heavily recommend this album and hope that a proper two-disc complete score is released someday.