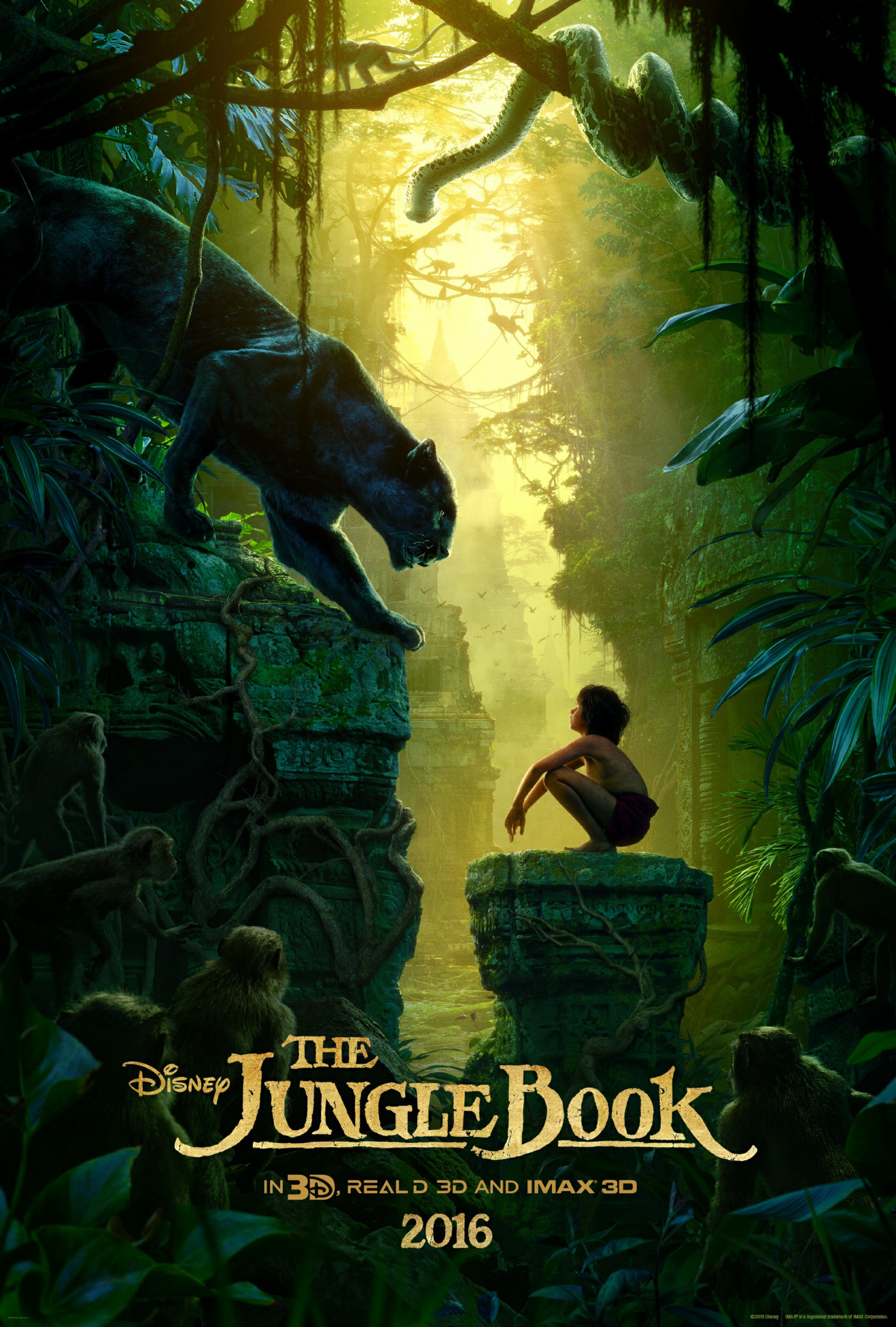 The latest live-action remake of animated Disney classics is The Jungle Book, directed by Jon Favreau. Like the 1967 cartoon, it tells the story of Mowgli, a human boy raised by wolves who is being told he has to return to mankind for his own safety, but wants to stay in the jungle. Actually, it sort of isn’t live-action. Aside from Mowgli all of the characters are CGI and the jungle environment itself was created in a computer. Actual filming took place in a studio. However, by taking extensive photos and film of real environments and animals, the visual effects team has created a marvelously realistic and vibrant feast for the eyes.

This film is based more on the 1967 cartoon than Rudyard Kipling’s book. For example, King Louie never appeared in Kipling’s work and was actually created by Disney. Also, the characters’ behavior is more based on the cartoon as well. The story, however, is expanded upon and tied together more cohesively. The theme of man’s ability to bring forth fire plays a greater role, and Mowgli’s adventures are more serialized than a string of thinly connected episodes. There are also a few twists that keep the story fresh and less predictable for both those who read Kipling’s work and saw the original animated film.

The voice acting in this film is great. Ben Kingsley is perfect as the wise and awesome black panther Bagheera. Scarlett Johansen plays the large python Kaa, a choice that was initially controversial as this changed the gender of the character. Her one scene features a wonderfully ominous buildup that slowly reveals her enormous and terrifying form. Kaa is definitely creepier here than the comically inept side-villain of the original. Instead of swirling cartoon eyes, her hypnosis is conveyed by shimmering eyes. The role of the wolves is largely expanded. In the original film they appear in the beginning and are then left alone. Here they appear throughout the whole movie with Lupita Nyong’o voicing Mowgli’s adopted mother. There’s also Mowgli’s “brothers” some very cute wolf cubs.

Idris Elba does a fantastic job as Shere Khan. Shere Khan was a good villain in the animated feature, but here he’s absolutely terrifying and has much more screentime. His character motivation is altered. In both films he hates men and wants to kill Mowgli, but in the original he seemed to be doing more for the perverted sport of it, while here he has more of a vengeance angle going on.

The two highlights are Bill Murray as Baloo the bear and Christopher Walken as King Louie. Baloo doesn’t have singer Phil Harris’ rich voice like in the original, but Murray does about as good a job in his own way. Like in the original he’ll definitely get the most love form viewers. Christopher Walken of course is just naturally amazing, so having him voice the king of the primates, even singing “I Wanna Be Like You”, is awesome. It should be noted that instead of being an orangutan, he’s an extinct ape called a Gigantopithecus, and he’s really, really large, the largest character outside of the elephants. Between his size, the buildup to his appearance, and his behavior, he proves to be much more frightening the character’s first incarnation, who was a short and goofy “king of the swingers”.

Then of course there’s the sole human character, Mowgli. Surprisingly, despite being both a child actor and having to act in front of a blue screen while talking to animal puppets (as the other characters are CGI), Neel Sethi does a good job. The character of Mowgli is much improved from the 1967 version. Instead of an idiot child who walks headlong into trouble all the time and naively trusts every predator, he’s intelligent and isn’t too stupid to run away from a tiger. He’s also a bit of a genius, as he’s able to fashion many tools to help him keep up with the animals. Really, our brains and dexterous hands are the only things that keep us above other animals and I love how the recent Jungle Book incorporates this fact.

The Jungle Book is a great remake, far better than the original, which was fun but not one of Disney’s stronger offerings. It uses CGI correctly and has amazing voice acting. One complaint might be that it gets pretty intense and scary for a kid’s film, but you know what? Kids should be allowed to be scared. The old Disney cartoons of the 30s and 40s had some pretty frightening scenes and parents don’t complain about those. A more valid complaint might be that this film has the current Hollywood trend of taking old fairy tales and stories and making them “bigger” (think of Snow White and the Huntsman turning that tale into a sword-and-sorcery epic). But at least Shere Khan isn’t commanding an army of evil animals or there aren’t a bunch of humans attacking the jungle with guns and torches. This is one of those films that can be enjoyed by all ages and not just because older people will have nostalgia. It’s the original Jungle Book with enough twists and changes to keep it fresh and engrossing. Christopher Walken as a giant ape alone makes this worth seeing.

Despite being a Christian, I’ve never really made an effort to watch Christian films (unless you count the sword-and-sandal epics from the 50s and 60s). I’ve seen Kirk Cameron’s cheesy Left Behind and End of the Spear, the latter which is actually a pretty great film covering a real-life incident involving missionaries trying to reach the Waodani tribe in South America. I’ve heard that Christian movies have a tendency to be rather preachy, only being accepted by Christians and not appealing at all to non-Christians. They also have such strict moral codes in being put together (no naughty words, violence, sexual content) that they end up looking like an alternate reality. After hearing so much criticism of Christian movies I decided to actually go see one with some fellow believers.

God’s Not Dead 2 is, as the title implies, the sequel to another movie, which came out just last year. The first film was a Christian student being harassed and then debating an Atheist philosophy professor played by Kevin Sorbo. I didn’t actually see it, but have read several summaries and seen a couple reviews with footage, so I was able to understand what some of the returning characters had gone through.

This time it’s a teacher in trouble. The very Christian-named high school teacher Grace Wesley (Melissa Joan Hart) answers a Brooke’s (a student played by Hayley Orrantia) questions about similarities between Jesus and Martin Luther King Jr. Since she quotes a passage from the Bible to further the comparisons, she gets in hot water with the school board, who believe she has used her classroom to proselytize. Refusing to claim she did anything wrong, she ends up in court.

Christian films are known for having poor acting. Thankfully, that problem is heavily alleviated here. Most of the characters from the first film are a little bland in their portrayals, but they actually got some good talent this time. Jesse Metcalfe is pretty likeable as Grace’s lawyer, Tom Endler, while famed singer Pat Boone is charming and funny as Grace’s grandfather Walter Wesley. The recently-deceased Fred Thompson has a pretty brief scene too as an elder pastor. But the best part of the movie is Ray Wise as an atheist ACLU prosecutor Peter Kane. Often having character actor roles in TV shows, Ray Wise is also known for his creepy, sinister smile. He really overdoes that smile as Peter Kane, at one point even evilly delighting in a pastor getting taken off the jury because he collapses. It ironically makes him the most delightful part the film.

But Wise’s acting is also part of a problem with this film. All of the Christians are portrayed as sweet people, while the atheists are just plain evil. Their two main facial expressions are mad glare and smug smirk. While there are doubtlessly atheists like that out there, they are a minority. I don’t think every atheist is constantly scheming about how he can destroy Christianity. This makes the movie very inaccessible to non-Christian viewers. I find it unlikely that any non-believer would find Christianity appealing when Christian filmmakers show him as a constantly irate villain who’s out to squash any Christianity he sees and take Duck Dynasty off the air (this franchise has a real obsession with that show). Unlike the first film, there’s at least an exception this time. Grace’s defense lawyer Tom Endler is a non-believer, but earnestly believes he is fighting for the rights of an innocent woman. Another positive change from the first film is in the subplots. Apparently the first movie was chock-full of subplots that had nothing to do with the main story, except that they all end up at a Newsboys concert at the end. In God’s Not Dead 2 there are a couple subplots which get a little tangential, but they all find a way to tie into the courtroom drama. I genuinely enjoyed one following a recently-concerted Chinese student who is visited and disowned by his atheist father. This is probably because it focuses on actual full-fledged persecution of Christians in China and other countries.

The courtroom drama itself is so-so. The case would have been thrown out quickly, since Grace did not proselytize at all. Sure, the parents of Brooke are the ones who make a big deal out of it, but I’m pretty sure the judge and the lawyers on both sides would dismiss it right off the bat. Some of the arguments of Tom Endler are pretty good, but I feel like he could have gone further to present a more convincing case. The most interesting part (besides Ray Wise’s acting) is when Endler tries to prove that Jesus is a historical figure, since this would make it appropriate for Grace to talk about him in a history class. They actually got the authors of Case for Christ (Lee Strobel) and Cold Case Christianity (J. Warner Wallace) to appear. They end up being the most compelling parts of the courtroom drama since they basically explain what their books are about and how they prove Jesus’ existence. I myself really want to read Cold Case sometime. Otherwise, the courtroom drama is full of atheist caricatures and its resolution is a bit of a cop-out.

God’s Not Dead 2 is an alright film, though it’s portrayal of atheists is troubling. It also exaggerates how Christians are treated in America. It states that their rights are constantly being trampled on by angry lawyers and school boards and occasionally this does happen (the film even references an actual event in Houston, Texas when pastors were almost forced to hand over their sermons for examination). But it’s so one-sided with little room for a gray area that it effectively can only be enjoyed by Christians. I hope the third film, which was teased after the end credits, will examine both sides of the issues of church and state more objectively, but I doubt that.