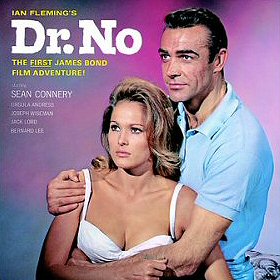 The one piece of music that should please fans of the franchise’s music is the first track, “James Bond Theme”. What new can be said about this, one of the greatest themes ever? It evokes coolness, danger, and sexiness (and at times heroism). It’s the ultimate spy theme. The actual creation of the theme is without controversy. The composer for Dr. No, Monty Norman, has always been credited with its creation in every film, and still receives royalties for its frequent use outside the movies. John Barry, composer of nearly a dozen James Bond movies, claimed that he wrote the theme. It is not known if this is true, but he did arrange the theme in its jazzy form.

Outside of the first track, there is little to recommend. It’s over half an hour of what sounds like source music, much of it repeated (as can be told from the track titles) with little variation. Norman did compose orchestral music, but not much. A five minute suite of this missing music can be found rearranged by the Prague Philharmonic Orchestra on some of their James Bond compilations. The Jamaican music isn’t necessarily bad, it’s just not something film music lovers and probably most James Bond fans would really appreciate. I do like “Kingston Calypso”, which is an eerie juxtaposition of a cheerful bouncy tune with dark, violent lyrics. Other songs include “Under the Mango Tree”, which plays in three tracks, and the forgettable “Jump Up”.

Beware the second to last track, which is called “The James Bond Theme”, as opposed to just “James Bond Theme”. This is another upbeat Jamaican tune that does not contain the actual famed James Bond theme, though it does appear in a couple of the other tracks.

Some tracks do manage to deviate from the incidental Jamaican music. One oddity is “Audio Bongo”, which sounds like something out of an old sci-fi movie and is in fact the first piece of music heard in the film. “The Island Speaks” is a dark percussion-driven cue, not the great suspense that John Barry would come up with, but effective nonetheless.

I would recommend skipping this album. It doesn’t offer much interest and is more like those “music from and inspired by” albums which feature a bunch of songs that may or may not actually appear in the movie. If you’re in the right mood this album can be an entertaining half-hour listen, but it pales badly in comparison to future installments.