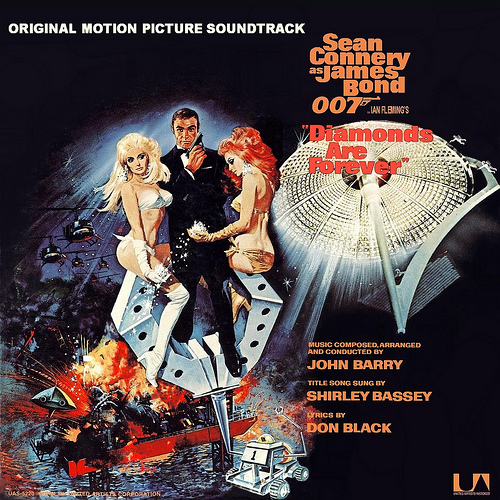 The main title song is sung by Shirley Bassey of Goldfinger fame and has a pretty nice tune, with a sparkling rhythm underscoring it. This sparkling rhythm always pleases when it backs up one of the themes in the soundtrack. It adds a haunting, mysterious atmosphere, which is odd because the movie isn’t like that at all. The main tune from the song isn’t too bad itself, and has a neat lounge-style instrumental appearance in track 6.

This is the most eclectic Bond score. There’s peaceful lounge music, big band source music, traditional orchestral material, and even an epic choir in “Slumber Inc.” I’m going to say right now that especially with the expanded release there is way too much source-style music, at least for my taste. I’m just not into a lot of the styles here as story-telling devices, and so “Q’s Trick”, “Airport Source’, “Whyte House”, and “Tiffany Case” seem to interrupt an otherwise very fine score. Otherwise, the music is pretty good.

Oddly enough, Barry decided that gay assassins Mr. Wint and Mr. Kidd garnered their own theme. There’s actually very few themes for the bad guys in Barry’s scores and when they appear they tend to represent their evil plots rather than the characters themselves (think “Capsule in Space”). But these two bumbling cronies get their own woodwind piece that appears fairly often. It’s a good tune, not dramatic, romantic, or exciting, but entertaining and more representative of the movie’s actual tone.

“Bond Meets Bambi and Thumper” is an example of a beautiful piece of music underscoring a silly scene. It features the sparkling rhythm underneath bits of the title theme and an electronic rendition of the James Bond theme. “Moon Buggy Ride” doesn’t exactly have a melody and is quite on the wacky side, but is an exciting action cue nonetheless. “Circus, Circus” is another source-style cue with slow merry-go-round music, but delivers on atmosphere. “Gunbarrel and Manhunt” is a highly engaging montage of small cues as James Bond tracks Blofeld across various locations, with the Bond theme adding to the proceedings. “Peter Franks” is the most violent cue, featuring a recurring action motif in its longest form.

The best track is “007 and Counting”, a new space march that mixes the style of You Only Live Twice’s “Capsule in Space” with the electronics and romance of OHMSS. The tingling electronics make for half the power of this cue. “To Hell with Blofeld” sounds like it should be a loud, exciting piece, but is rather slow until the last couple minutes, where it breaks out into an exciting reprise of the 007 theme.

The 2003 re-release has “Additional and Alternate Cues”. This track is somewhat a bother (but thankfully placed at the end). The additional cues are either very short without impact or yet more source music. The alternate cues are basically tracks 2 and 3 with a few differences.

This soundtrack is definitely worth buying. If you’re like me and don’t appreciate the liberal smattering of source music that much, there’s still plenty of other styles and some great renditions of the James Bond theme.