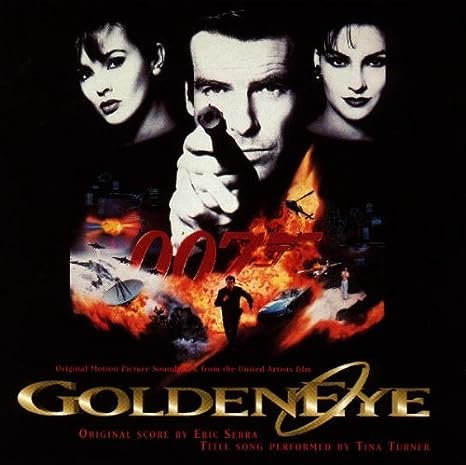 This is one of the most infamous movie scores in history, mainly because it’s a James Bond score. There are almost no lush romantic themes and the none of the jazzy orchestral style associated with the series. Instead there is a load of electronics interspersed by odd choral bursts and a cold, mechanical gong (which does sound pretty cool). While failing to fit in with the James Bond franchise, this style of music does convey the atmosphere of a collapsed Soviet Union. There are purely orchestral moments, but not very often and never to the depth of Serra’s predecessor John Barry or successor David Arnold.

While the score has been a source of controversy, most agree that Tina Turner’s opening number “Goldeneye” is great. It’s a catchy, sexy song with small hints of the James Bond theme. The opening notes have received much praise and there has been great lament that they were never utilized by Serra in his score (no references to the entire song, really). David Arnold corrected this, using the notes in Tomorrow Never Dies’ “Hamburg Breakout”. There’s little in the way of themes at all. Much of the music ties together stylistically, but aside from the rare reference to the James Bond theme there’s little given to listeners. There is a string suspense motif that first appears around the 4:15 mark in “We Share the Same Passions”. It’s effective for the film’s atmosphere, but very pedestrian. The same track also has its own love theme which is merely okay. Much better is Natalya’s theme, which bookends “Severnaya Suite” and pops up later in “That’s What Keeps You Alone” and “Forever, James”.

The score kicks off with “Goldeneye Overture”, which sets the tone with its mechanistic percussion, dark electronics, and bursts of Russian-sounding choir. It’s one of the two tracks on album to feature the James Bond theme (albeit only parts of it), and even weaves in the opening of the Goldfinger theme. It’s not too bad a track, actually pretty cool. The James Bond theme appears more fully in “A Pleasant Drive Through St. Petersburg”. It’s one of several cues replaced in the film, as producers were so irked by the lack of a traditional version of the James Bond theme they had Serra’s orchestrator John Altman produce an entirely different piece with more obvious statements of said theme. This alternate piece appears on some of the City of Prague Philharmonic Orchestra’s Bond compilations.

The rest of score is a mixed bag (I should also point out that many of the tracks are made up of several cues which are listed in the album’s booklet). “Ladies First” is the most obnoxious track, a bunch of rambling electronics. “We Share the Same Passions: is a simplistic romance cue that gets long-winded and boring. “A Little Surprise for You” is a take it or leave it track. “Our Lady of St. Smolensk” is a minute of escalating suspense featuring eastern choir. “Whispering Statues” starts with string music before a Russian choir takes over for a few seconds. After more Goldeneye gongs Serra plays some anonymous piano music which sounds too tragic for what’s happening on screen. “Run, Shoot, and Jump” is the closest to a full-on orchestral action track and was edited into several parts of the final fight.

“Your Fatal Weakness” is chilling in its slow train-like dirge. “Dish Out of Water” starts off a bit dream-like before going into electronic percussion, concluding with two statements of an effective menacing motif. “The Scale to Hell” actually features two cues that were replaced in the film. The first, “Boris’ Lethal Pen”, is a building suspense cue that was probably taken out because of its annoying electric strikes. The second, “I Am Invincible”, has bits of “Goldeneye Overture” and was supposed to play as Bond rushes to save the day towards the end. At the end is a love song written by Eric Serra himself which is both pretty bad and really long, clocking in at about six minutes.

I have trouble rating this score. I think because I like the movie, and some of the instrumentation sounds cool and different, I don’t have the dislike that other Bond fans have, but I have to admit that it was too radical a shift in musical styles, and some of the music is indeed bad. I know my first listening could get a bit torturous at points.