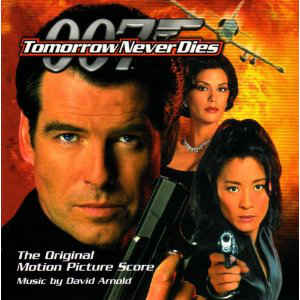 After the critical failure of Eric Serra’s Goldeneye score, the producers brought in David Arnold, who had just released his James Bond tribute Shaken Not Stirred, a collection of title songs and a few instrumentals redone by artists (regrettably this was in the 90s). John Barry was impressed with some of the re-orchestrations Arnold did for the songs and recommended him. This turned out to a popular choice with Bond fans, and Arnold has the second most Bond scores under his belt.

David Arnold has been lauded for his ability to pay homage to John Barry while having his own style. Tomorrow Never Dies is singled out for its successful merging of orchestral and electronic elements. Arnold has received criticism for scoring most of the action cues with loud, multi-layered music, whereas most previous composers would take a more restrained approach, often leaving scenes unscored so that the sound effects could take over or to build suspense. This criticism of Arnold is true to a point. Some of the more basic fist fights could do with less noise instead of being scored like climatic battles. But at least his music is highly enjoyable.

David Arnold also received criticism during the Brosnan years for his heavy use of the James Bond theme. Tomorrow Never Dies needed that theme, though, after Eric Serra almost ignored it in his work for Goldeneye. Plus Arnold never runs out of ways to use the theme. If he uses it to copious amounts, he at least provides a healthy dose of his own original themes and motifs. In addition to bringing James Bond theme back to its lost glory, he also uses From Russia with Love’s opening title motif, first in “White Knight” and then in a heroic burst in “Tricky Spot for 007”.

The album and title song situation for Tomorrow Never Dies was a mirror of what happened with Thunderball 25 years earlier, though this time the problems would be quickly rectified. Thanks to post-production issues, Arnold only had up to two-thirds of his score ready for the album release. Thankfully, fan demand would see a second album release several years later focused just on the score and containing all the highlights from the film’s last act. Also as with John Barry and Thunderball, Arnold’s preferred song would be denied its presence over the opening titles. Instead, a contest of submitted songs would see Sheryl Crow get the honor. K.D. Lang’s song, which contains some of Arnold’s themes, would get to play in the ending credits. Crow’s “Tomorrow Never Dies” is not bad, even though it’s really hard to hear half of what she’s singing. There’s not as strong a melody and none of it is utilized in the score.

“Surrender”, on the other hand, provides three themes. The bombastic opening notes, in the vein of Goldfinger, serve as a secondary James Bond motif that is frequently paired with the James Bond theme itself. The tune for the verse is the film’s main theme and first appears towards the climax of “White Knight”. Aside from serving in the action cues, it can also be suspenseful (“Doctor Kaufmann”) and romantic (“Kowloon Bay”). In other words, it’s a perfect main title theme. The last theme is from the chorus and is most associated with Chinese agent Wai Lin (Michelle Yeoh). Since Yeoh’s character doesn’t appear much until the second half, this theme only appears briefly on the original album, at the end of “Station Break”. It starts to take a more active role with “Helicopter Ride” and graces the climax of “All in a Day’s Work”.

Even outside of “Surrender” there are plenty of new themes. Bond girl Paris has a very strong love piece (“Paris and Bond”). The villains have their own theme as well. Unlike other Bond composers, Arnold is more consistent with providing themes for the villains. Carver’s theme has its first full appearance at the conclusion of “Sinking of the Devonshire”. It usually appears in a more subdued fashion, ironic for one of the more over-the-top baddies of the franchise. There’s a repeating, descending four-note motif in “Underwater Discovery” (and with a couple other brief references). It would crop up more often and less subtly as a suspense/action theme in Arnold’s later offerings. There is a tiny military motif that’s only represented on album at the end of “Tricky Spot for 007” and a somber motif for the Devonshire towards the end of “Sinking of the Devonshire” and in “Underwater Discovery”.

The first track from the score on the original album is the pre-titles “White Knight”. Arnold opts to score the Gunbarrel differently, starting with the rhythm rather than the opening fanfare. Right off the bat, listeners can tell this score will be big and bombastic, with plenty of references to the James Bond theme and the secondary Bond motif from “Surrender”. “Sinking of the Devonshire” takes a while to get going, but is nevertheless a strong track. It oddly features a few seconds of choir starting at the 5:04 mark. The choir never gets used again in the score, which means he had to hire a few vocalists just for this tiny bit. It does help represent the tragedy befalling the British sailors.

Contrasting heavily with the somber and villainous music is “Company Car”, an awesome version of the James Bond theme infused with the secondary Bond motif. It’s all jazzy buildup until the last few, big brassy seconds. Things get quieter with “Paris and Bond” and “The Last Goodbye”. “Hamburg Break In” and “Hamburg Break Out” display a great handling of techno elements, never growing obnoxious and staying in the Bond style. “Doctor Kaufmann” is a neat piece, with its repeating four-note motif and truncated variation of the movie theme. “Backseat Driver” is an awesome techno track, with an assist from Propellerheads (There are at least three backseat driver jokes in this movie. Maybe the screenwriter was dealing with annoying children). It served as the action climax on the original album since the actual climax was not yet available. Ending the original album is a techno remix of the James Bond theme by Moby, with a couple film quotes from Tomorrow Never Dies and Goldfinger inserted.

The second album features all the score tracks from the original save “Station Break”. The new material starts with “Helicopter Ride”, a heavily techno-laden version of Wai Lin’s theme. “Bike Chase” is a lengthy chase cue with the usually heavy dosage of the James Bond theme. “Bike Shop Fight” starts with some East Asian instrumentation before a piano variation of Wai Lin’s theme and some more action music. “Kowloon Bay” is a romantic track featuring the main film theme and bits of Wai Lin’s theme. “Boarding the Stealth” is another action track, this one more restrained in references to the main themes. “Tricky Spot for 007” is mainly Carver’s theme before the James Bond theme triumphantly makes an appearance. “All in a Day’s Work” is a pounding finale, where halfway through the Bond theme breaks free. It ends with the best version of Wai Lin’s theme, an awesome finale for a great score.

Tomorrow Never Dies remains David Arnold’s best Bond score to date. It liberally uses the James Bond theme, but features plenty of its own great original themes. If you want the action side of James Bond music, this is the score to check out. It’s fun with nary a dull moment. This was a great revival for the franchise’s music after Serra’s unconventional and for many unlistenable Goldeneye. The only severe problem comes from the way the music was released. One would have to get his hands on both albums and put together all the tracks to get a full and complete listening experience (if you want to create a CD at least one track would have to be excised. I would recommend Moby’s remix). On another note, some of the DVD releases have the complete score, making it easy for people to rip it and place it online, so every bit of music can be found.