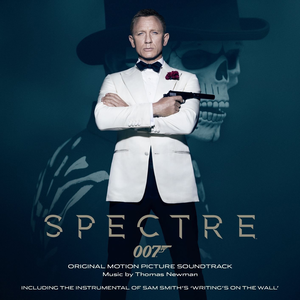 Spectre, as the title suggests, reintroduces the evil organization led by the cat-stroking Ernst Stavro Blofeld. Daniel Craig’s performance as 007 is even better, but the film is a mixed bag. It’s good for the first two-thirds, but gets mired by an attempt to link all of the Craig films together. It also tries to tie his origins to Blofeld and Spectre’s creation, an unnecessary move that wastes time and adds nothing. It’s not a terrible film, just an underwhelming and bland one

With Sam Mendes staying on for this film, it was inevitable that Thomas Newman would return too, making him only the third recurring composer after John Barry and David Arnold. Unfortunately, entire passages of music are recycled from Skyfall, though the album does focus on the more original material. For the third time the title song is not included on the soundtrack! This time it’s Sam Smith’s “Writing’s on the Wall”, which has good lyrics and fantastic music. Its main downfall is Smith’s singing voice, which just didn’t do it for me. I feel he gets way too high-pitched at points. Also, as with Adele’s “Skyfall”, Newman only uses the song once in his score, in an instrumental version that doesn’t even make full use of the melody. Perhaps there were production issues as with Skyfall that hindered him from utilizing it more.

The score itself starts off strong with “Los Muertos Vivos Estan”, a nice blend of the James Bond theme and percussion by Tambuco. Another early track, “Donna Lucia”, has some good romance material. But the album as a whole goes downhill from there. Newman’s score for Skyfall, while emphasizing atmosphere, had plenty of energy, interesting uses of the Bond theme, and even a few cues that sounded Bondish. The score here meanders, focusing on dreary atmosphere for long sections. The action material, especially from the film’s last act, are terribly bland.

There is a more obvious use of motifs. The Bond’s Past motif from Newman’s other offering is given much more prominence. There’s a new theme for Bond, consisting of two-note increments on piano, which gets consistent play. Madeleine has her own theme as well (in the track of the same name). It’s decent enough, though it doesn’t hold a candle to what Barry or Arnold would produce. The other motifs take a couple listens to recognize and aren’t memorable. They can often be confused with filler underscore. That’s the problem with the music for Spectre. Most of it isn’t memorable and passes by without the listener noticing. It can’t sustain its album length, which falls maybe twenty to thirty seconds short of filling out an entire CD.

There are decent, even good moments on this soundtrack, and Thomas Newman is a very talented composer. But it didn’t entertain me or sustain my interest, and it’s far too outside the musical style of the franchise and is emblematic of today’s bland action scores.