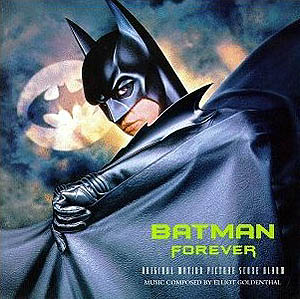 Following complaints about the unpleasant nature of Tim Burton’s Batman Returns, Warner Brothers replaced the director of the Batman franchise with Joel Schumacher, who provided a more kid-friendly blockbuster. Though Batman Forever was heavily criticized for its overbearing neon lighting and its poor Two-Face (played way too over-the-top by Tommy Lee Jones), I rather like certain aspects of the film. It was the first in the series to seriously explore Bruce Wayne’s origins (although many of the scenes that would have effectively explained this plotline were unfortunately cut from the film) Michael Keaton’s replacement, Val Kilmer, does a fine enough job as Batman aside from some really goofy and memetastic faces, Jim Carrey turns in a delightful, if over-the-top, performance as the Riddler, and Elliot Goldenthal comes in to do perhaps one of his best scores.

Elliot Goldenthal is known for his dissonant fragmented style, which tends to turn off listeners. However, I find Batman Forever to be a very good effort, not to mention the most thematically complex in the franchise. Dissonant Goldenthal trademarks are found all over the place, from the wailing French horns to the loud clangs. It is a score fully appropriate for the zany atmosphere of the film, with a myriad of styles ranging from traditional orchestral pieces to circus music to waltzes.

Joel Schumacher initially wanted Goldenthal to reuse Danny Elfman’s famous Batman theme, but was convinced by the composer that such a theme would not work well in the more campy film. As a result we are given an equally good fanfare which provides much more interesting malleability, although the dark edge of Elfman’s work is somewhat lost. The new Batman theme appears in nearly every single track in a seemingly limitless number of variations. In fact, most of the themes are based around several short motifs, linking them all together in a complex web. For example, the Riddler’s four-note motif can also be found in Two-Face’s theme, and a three-note danger motif is found within several larger themes. It’s amazing how Goldenthal can provide such intelligent writing for such a silly film.

There are two notable secondary themes derived from the main theme. The first is a bombastic reworking amid a bunch of whirling and screeching strings and random jazzy sound effects labeled “Gotham City Boogie”. The second is a love theme with the end of the Batman theme put in (“Chase Noir”). The tragic background and stories of Batman and his newly-acquired sidekick Robin are provided with a melancholy piece. It appears on slow strings in the quiet “Pull of Regret” and has louder moments in “Under the Top” and “Spank Me! Overture”. Its best appearance is in ‘Under the Top” where it builds up to a loud climax and then subsides into tragedy.

The villains get their own wide range of musical ideas. Two-Face is given a fairly long theme suitably played in two-note increments. It fails to convey the tragic nature of the comic’s character, but this is expected due to Tommy Lee Jones’ poor performance and the script’s propensity for giving him comical one-liners. The highlight track for this theme is the waltzy “Two-Face Three-Step”. Jim Carrey’s wacky performance of the Riddler is backed by an equally absurd collection of music. Starting off with a descending four-note motif, Goldenthal puts it through so many variations and into so many melodies that it will take several listens to find all of its appearances. “Nygma Variations” is a six-minute suite for the Riddler which starts off with an ominous march and after a quiet bit of sci-fi theremin enters into a series of wacky electronic cues and the action version, which doubles the amount of notes in the theme in half the time. For moments underscoring the Riddler’s unstable emotional mind, Goldenthal uses discordant violin pieces and when the villain’s grand scheme reaches fruition a loud bombastic theremin.

Two tracks well worth mentioning are “Victory” and “Holy Rusted Metal”. “Victory” is my favorite because of the way it changes moods so fast while being entertaining. Two-Face’s theme loudly starts off this cue until the Batman fanfare breaks in, only to literally flop as our hero falls into a trap. The music then gets louder and louder as Batman is engulfed in flames. However, a secondary fanfare breaks out as he emerges from the flames. Goldenthal then utilizes an electronic organ as he ends up being in an even worse situation. Ending the cue is yet another recurring heroic fanfare as Robin saves Batman from his death. “Holy Rusted Metal” is notable for its grand villainous fanfare which would get more play in the dismal sequel Batman and Robin.

How does the album do as a listening experience? There are few quiet moments, although there is a five-minute interlude in the middle consisting of “Pull of Regret’ and “Mouth to Mouth Nocturne” (a very lovely piece). But the action, while very loud and furious, isn’t the type that you enjoy for rhythms and frantic pacing. Batman Forever benefits from its large number of themes and the seemingly endless number of variations they undergo. Batman Forever is not for everyone thanks to its loud, dissonant nature and has received plenty of flack from film score reviewers. In fact, it will downright annoy many of your friends. The score album is a little hard to buy, but if you like the music, get it before it becomes even more rare. Batman Forever, in my opinion, has about equal standing with Batman Returns and is the most complex bat-score ever made thus far.

La-La Land Records released the complete score in 2012. Frustratingly, despite providing all the music, some of the material on the first disc is out of chronological order for some unexplained reason. Regardless, there are plenty of new variations on the themes and motifs to check out. My favorite previously unreleased music is ‘Scuba Fight/Claw Island/Emperor of Madness”, which has a lot of that awesome fanfare from “Holey Rusted Metal”. Of the three complete Bat-score releases, this is the strongest, since the highlights of the Danny Elfman soundtracks were all present on the original releases anyways.