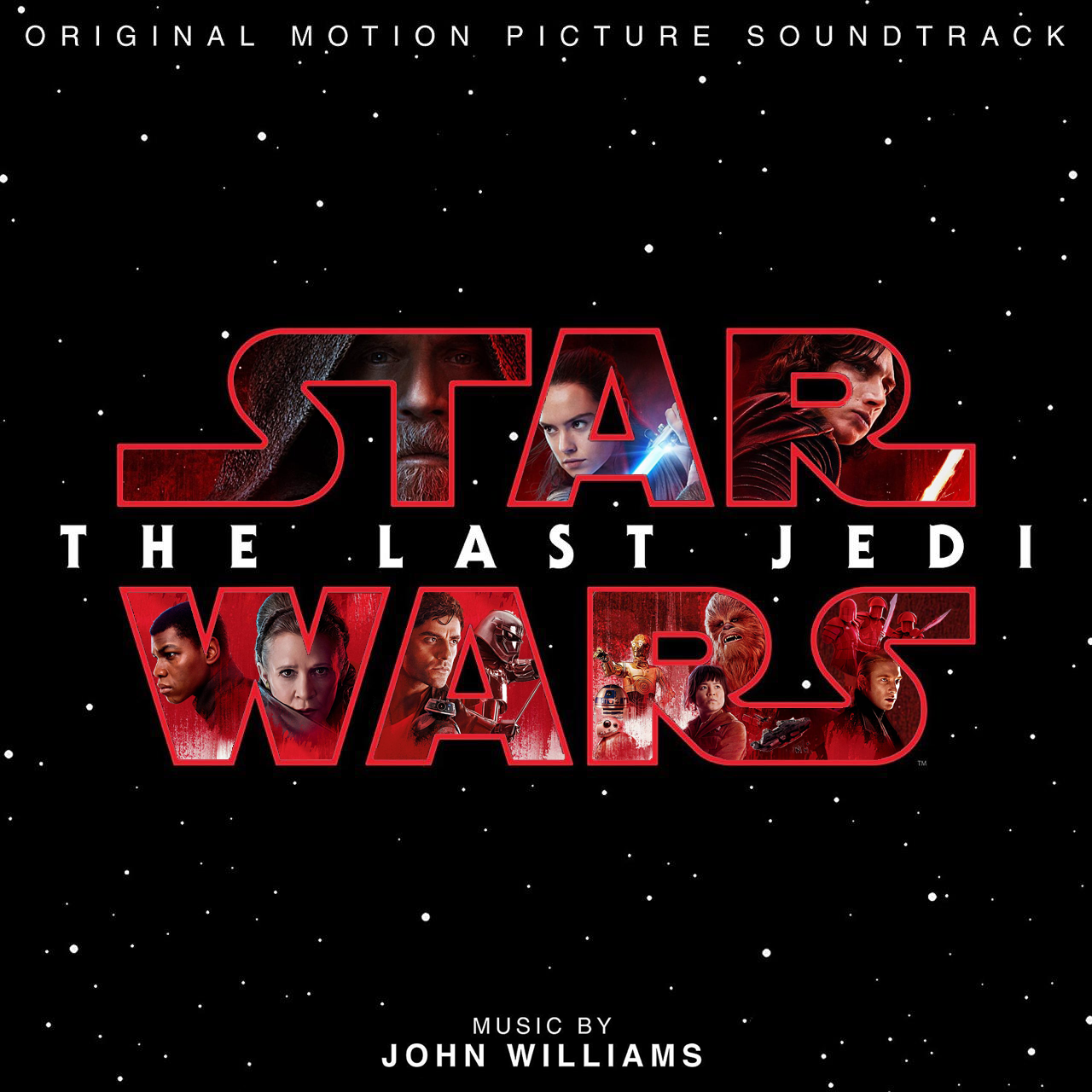 The followup to The Force Awakens, The Last Jedi opened to critical acclaim, but had a lot of detractors among fans and Youtube critics. I actually loved it and think it’s the fourth best Star Wars movie. I think people had too much expectations and were disappointed when the movie went in another direction. I liked being surprised and I thought the character development for Kylo Ren was particularly fascinating. I can understand why some people may be upset with the film and over time have recognized a couple complaints as valid, but I think calling it worse than the prequels is a bit far. Speaking of the prequels, the one thing everyone actually loved about those movies was John Williams’ music. The same can be said for the maestro’s Last Jedi score.

I must be in the minority when I say that this is the weakest of his Star Wars scores. I still love it, but I think it has a couple major problems. The first problem, which will tie into my rundown of the new themes, is that there is no great new tune. Every movie has at least one stand-out piece. Empire had the Imperial March, Attack of the Clones had “Across the Stars”, the Force Awakens had Rey’s theme, etc. None of these new themes or motifs really hit me the same way, mainly because most of them are brief and rhythmic rather then being full melodies.

Desperation: This fast-paced motif accompanies many of the battle scenes. It’s called a Desperation motif because the heroes are in a really tight spot for most of the movie. It appears about four and a half minutes into track 1.

Holdo: This may just be another action motif, but it gets associated with Laura Dern’s Admiral Holdo character since it’s used during her biggest moment. It’s a mix of heroism and desperation and appears eighteen seconds into “Chrome Dome”.

Old Luke: Luke Skywalker gets a new rhythmic piece that first appears in “Ach-To Island”. It was first thought that the motif from “Jedi Steps” would serve this purpose, but it’s supplanted by this motif which is quite good. It’s one of Williams’ two-part themes.

Rose: Rose’s theme has a sense of sweetness and wonder and was the only theme I was able to discern on my first viewing of the film. It’s too short to be very malleable, but this makes it fit in nicely with action cues such as “The Fathiers”. It debuts in “Finn and Rose” and has a prominent spot in the end credits suite.

In addition to these new motifs, there are loads of themes from the previous movies. Unfortunately, many of them don’t get much in the way of further development or new variations. It sounds like Williams cut and pasted bits of his concert suites into the score. For example, the outburst of Kylo Ren’s theme towards the end of “Revisiting Snoke” is right out of TFA’s end credits arrangement. The Force theme is used ad nauseaum, and half the time it sounds exactly the same. However, there are a couple returning themes that are nice to have back, and I’ll discuss them as I go through the album. There is a spoiler for anyone who hasn’t seen the movie.

“Main Title and Escape” starts with the customary statement of Luke’s theme before rehashing the opening of A New Hope. This moment really had me worried that Last Jedi would go into retread territory, imitating Empires Strikes Back as TFA did with A New Hope. Thankfully, a rollicking action piece ensues which just screams desperate heroism. The album version is an edited down version of the film sequence to make more room for other tracks, but the full version is available on Youtube. “Ach-To Island” starts with the Jedi Steps motif before handing the spotlight over to Luke’s new theme.

“Revisiting Snoke” brings back that villain’s deep choral motif, which I hoped would get further development. This doesn’t happen for reasons that will be obvious to anyone who’s seen the film. It brings back Vader’s theme for a brief statement and then Kylo Ren’s. “The Supremacy” is another space battle cue that turns forlorn towards the middle. Leia’s theme plays on piano before surging into a full orchestral version. “Fun with Finn and Rose” introduces Rose’s theme while “Old Friends” returns to the new Luke Skywalker material. “Rebellion is Reborn” is the sole concert arrangement, a very good mix of Rose and Old Luke’s themes.

“Canto Bight” kicks off with a romantic gesture before turning into jazzy music akin to the Mos Eisley band music. “The Fathiers” is a light-hearted action piece centered around Rose’s theme. Tracks 12 and 13 focus on Luke and Rey’s material, with “Sacred Jedi Texts” featuring the return of Yoda’s theme, though it’s lifted right out of the concert suite. “A New Alliance” starts dark, but builds into an epic statement of the Force theme before action ensues. There is some neat percussion in this track that is reminiscent of the prequel scores. “Chrome Dome” continues this. After a couple heroic statements, Williams has a deep drum pound away accompanied by sharp orchestral strikes. It’s a short track, but my favorite as far as the action material is concerned.

“Battle of Crait” revolves heavily around the various Resistance themes and motifs. I like it well enough, but something is off about the flow. This is my final gripe with the music. Several tracks just don’t flow all that well. I heard there was a lot of edits made, as with “The Escape”, so perhaps this has something to do with it. Anyways, there’s a statement of “Tie Fighter Attack” and around the 5:50 mark a somber piece that gets choral backing.

“The Spark” brings back the Luke and Leia theme. I am so happy to have this theme back. It only had a couple appearances in Return of the Jedi and the characters never met in The Force Awakens so there was no opportunity for its use there. The same track concludes with a cool variation of what played in the trailer. “Peace and Purpose” has an epic version of the Force theme, a militant variation of Kylo Ren’s theme, and finally Poe’s theme, which got cut out of the first track. The opening of “Finale” is great, displaying childlike wonder and then the Force theme before the end credits roll. The end credits suite however is a jumbled mess. With no massive new themes there isn’t something Williams can turn into a concert arrangement, so it’s a pastiche of short motifs and cues. There is, however, a piano rendition of Leia’s theme that plays over the dedication to Carrie Fisher.

While I think this is the weakest Star Wars score with its copy-and-paste style for many of the pre-existing themes and a lack of memorable new ones, it’s still a great listen. It’s nice to still have a full, orchestral score with clear-cut themes in this age of temp-tracking and minimalism.