After the success of Jurassic Park Spielberg was asked to direct a sequel. There is some contention about how much he wanted to do it since he was busy building up Dreamworks. Regardless, it’s a far inferior film. Actually, a lot of the elements are good, especially Pete Postlethwaite as big game hunter Roland Tembo. But the film is riddled with plot holes and a couple heroes who, despite the film’s insistence that they are protecting dinosaurs from exploitation, in fact endanger themselves and every other human in the film with their well-intentioned stupidity. It’s a bad Spielberg film, which means it’s at least an okay film overall.

John Williams surprised many, and according to some disappointed, with his decision to take the music in a very different direction. Since the setting is changed from a theme park to a wild island were dinosaurs have been allowed to roam free, he decided that the music should be more primal. Thus the soundtrack is much more dissonant, rife with percussion and brash orchestral strikes. Listening to this score makes one realize that if he wants to Williams can really let loose with the percussion and this gives the entire product a wholly unique flavor in his repertoire. The atmosphere is one of a lurking jungle punctuated by moments of intense terror. The drawback is that the music isn’t as consistently enjoyable as the first film’s, but at least Williams didn’t ape himself. END_OF_DOCUMENT_TOKEN_TO_BE_REPLACED 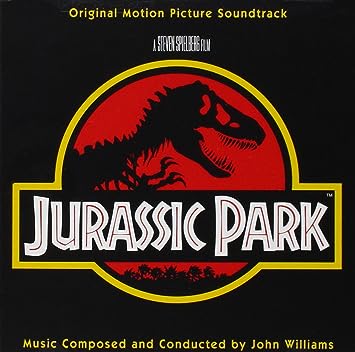 Along with Schindler’s List, Jurassic Park was part of the one-two 1993 punch involving Spielberg and John Williams. It shows how they were at the top of their game, both producing two of their greatest works in a single year. While Jurassic Park novel had its humorous moments, it was very cynical and violent. The film has cynicism and violence, too, but Spielberg’s lighthearted manner of storytelling takes over. The movie actually departs from the book quite a bit, and yet both book and film are amazing and I can’t decide which is better. END_OF_DOCUMENT_TOKEN_TO_BE_REPLACED

This time James Newton Howard has disappeared completely, leaving Hans Zimmer and Media Ventures in sole control. The one noticeable result of this is the absence of any strikingly heartfelt emotional cues such as the love theme or “Harvey Two-Face”. This isn’t to say that Zimmer’s work is bereft of emotion, it just doesn’t hit you the way Howard’s material does. END_OF_DOCUMENT_TOKEN_TO_BE_REPLACED One area that did not  necessarily improve from Batman Begins is the music. Once again collaborating with James Newton Howard, Hans Zimmer and Media Ventures was now in even more control, with Howard only rarely showing his style. When deciding who would get what of the two new main character themes (Joker and Harvey Dent/Two-Face), Zimmer got the big main villain. END_OF_DOCUMENT_TOKEN_TO_BE_REPLACED