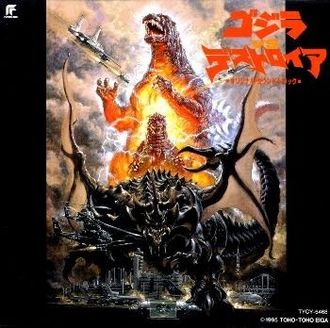 With an American Godzilla film underway, Toho decided it would be wise to avoid having two concurrent Godzilla series. They decided to go out with a bang and heavily advertised that Godzilla would die in the next film, Godzilla vs. Destroyah. This guaranteed strong box office sales. Godzilla vs. Destroyah itself is one of the stronger Heisei offerings. Godzilla has absorbed too much nuclear energy, to the point that parts of his body are glowing. Humans learn that he will eventually implode and cause a global nuclear nightmare. Thus they need to cool him down with freezing lasers at the critical moment. To make things worse, the Oxygen Destroyer from the original film has mutated pre-Cambrian creatures into a super-powerful Kaiju named Destroyah. The film wonderfully ties in the original film’s plot, bringing everything full circle. However, it’s far from perfect. Some of the budget-saving work is surprisingly lazy. Godzilla is superimposed into stock shots of cities that show pedestrians and traffic going about their normal business. At least the effects for Destroyah himself are pretty neat.

It was only natural that the Big G’s big death be scored by Akira Ifukube. Ifukube starts off with an epic percussive flourish in “Toho Logo” and ominous strings in “Disappearance of Birth Island.” The real strong start is “Main Title.” Ifukube reworks the secondary Godzilla motif from Godzilla vs. King Ghidorah and mixes it with the Terror of Godzilla theme. This new version of Godzilla’s motifs serve as his theme for the film, as he is a walking global bomb at this point. After a harp flourish at the 2:03 mark Ifukube launches into Destroyah’s theme. It’s a powerful identity that suggests the world-ending power of Godzilla’s final foe. In an interview Ifukube revealed that he originally wanted to use the Oxygen Destroyer motif from King of the Monsters, but decided it did not effectively convey the monster it created. He does use the eerie strings from it under a light-toned iteration of Destroyah’s theme in “Discovery of the Tiny Creatures.” Destroyah’s theme makes frequent appearances, in ominous foreboding fashion in the earlier cues and in grander fashion in the later battle cues. Ifukube really plays with the theme’s tempo. Sometimes he really slows it down to drag out its menace.

In addition to the strings from the Oxygen Destroyer motif, Ifukube brings back the emotional theme from the first film for “Oxygen Destroyer.” This backs up a flashback sequence involving that movie’s female lead. The Maser tank march also returns in “Self-Defense Force’s Preparations,” as does Baby Godzilla’s theme for a now older Godzilla spawn. Aside from Destroyah’s theme, the major original theme is for the flying vehicle Super-X III. It first appears on piano in “Super-X III.” It evolves into a full blown military march when the vehicle spurs into action in “Godzilla vs. Super-X III” and “Super-X III Sortie.”

Finally there is the Godzilla March. While Ifukube chooses to represent Godzilla through his dark reworked theme, he does bring out the March for a couple key moments, such as the Big G’s arrival to confront Destroyah. But Ifukube’s work with the theme really shines at the climax. “Requiem” is an emotional send-off. It starts off with a somber death motif, first heard on horn, then repeats accompanied by strings. About a minute in the music swells and goes into a soprano choir. At 1:53 the choir is joined by a peaceful iteration of the Godzilla march. The track then repeats itself. The heroic portion of the Godzilla March also graces “End Credits.” Interestingly the middle of this track is occupied by Ifukube’s King Kong theme. His explanation for this was that it fit the length of the track’s middle. While King Kong has nothing to do with this film, it is nice to hear his theme back for the grand finale.

Ifukube did a great job ending the Heisei series on a high note. The new versions of Godzilla’s themes are great, Destroyah’s theme is great, and the climatic cues really work as an obituary for the Big G. This would be Ifukube’s last score for the franchise. Like John Barry with the James Bond franchise (referencing Living Daylights here), he managed to go out with one of his best works. He would decline to do any of the following Shinsei series and passed away in 2006.