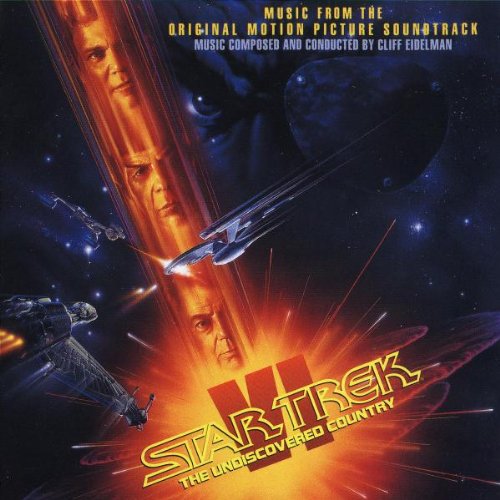 After The Final Frontier shook confidence in the Star Trek franchise, Nicholas Meyer, director of Wrath of Khan, returned to give the original cast a fitting send-off. Undiscovered Country seeks to explain how the Federation and Klingon Empire made peace before the Next Generation TV series. Thus it serves as a prequel of sorts for the 90s Star Trek shows. For some reason this movie doesn’t get as much attention. It was well received at the time and is still highly regarded by those who remember it. In fact it’s considered one of the best films (my personal third favorite). The movie’s plot is a reflection of the end of the Cold War, down to a moderate Klingon sporting the name Gorkon (as in Gorbachev, get it?). After a Chernobyl-like disaster, the Klingon Empire is pressured to finally seek peaceful relations with the Federation. The peace talks are undone, however, when the Klingon ambassador is assassinated. Kirk, who retains an intense hatred of the classic antagonists, makes a convenient target to frame for the assassination. It’s up to him and the rest of the Enterprise crew to uncover the conspiracy to derail the peace talks.

Instead of bringing back Goldsmith or Horner, Meyer planned to have Gustav Holst’s Planets rearranged and used as the score, akin to Stanley Kubrick’s use of classical music in 2001: A Space Odyssey. It turned out that the rights to Holst’s music were quite pricey. Meyer ended up hiring the 26 year old Cliff Eidelman based off a submission he sent in. The young composer was ecstatic at the chance to do a Star Trek score. Meyer instructed him to look to Holst for inspiration but otherwise Eidelman had a massive chance to do his own thing and make his mark. His music is distinctively darker, though there are a few nods to established conventions such as spiritual Vulcan material and a nautical theme for the Enterprise. The most obvious reference to Holst is the dark rhythmic action and suspense. These quite intentionally bring to mind “Mars, Bringer of War.”

There are five major themes/motifs that make up the score. “Overture” introduces three of them. The first and most prominent one is a foreboding, dark rhythmic identity that represents the villains’ efforts to derail a possible Klingon-Federation peace. As the conspiracy underlies most of the film, the motif’s presence is felt all across the soundtrack. For the purpose of simplification I will refer to it as the Conspiracy motif. Usually suspenseful, it does soar to dangerous heights in “Battle for Peace.” The second motif introduced in “Overture” is another dark rhythmic piece, in fact something of an extension of the Conspiracy motif, for the Klingons (0:58). This is not as strong as the conspiracy motif and in fact would go unnoticed if not for its presentation in “Overture” and “End Credits.” It sounds more like a basic suspense signature.

The third motif in the initial track is a sparkling, ascending four-note signature that usually appears in counterpoint with one of the other motifs. This optimistic ditty, which can be called the Peace motif, represents the hope for and then accomplishment of peace and stands in stark contrast to the major dark identities. Eidelman’s theme for the Enterprise and the original cast characters (introduced in “Spacedock/Clear All Moorings”) is not as dense or adventurous as the previous composers’ creations, though still noble. Also by comparison its appearances are very limited (for that matter so is the Peace motif). Undiscovered Country, after all, is a darker film where it’s unclear who the enemies are. The fifth theme is the latest representation for Spock. Here Eidelman actually makes a clear reference to a previous composer’s work, in this case James Horner’s Spock theme. The fourth Spock theme sounds like a very close cousin, with borrowed phrases and a similar structure. More specifically it sounds like Horner’s Vulcan material from Search for Spock.

The first track, “Overture,” sets the tone. While previous films injected audiences with a sense of adventure and heroism, this piece suggests a dark conspiracy. “Spacedock/Clear All Moorings” introduces the Enterprise theme with help from the Peace motif. Alexander Courage’s theme appears on low horn at 1:00. “Spock’s Wisdom” introduces the reconfigured Spock theme on synthesizers. This soft performance leads to the return of the Conspiracy motif (2:01). “Guess Who’s Coming” underscores the arrival of a Klingon delegation with aggressive instrumentation. At 0:31 Eidelman starts up a percussive beat that actually comes back later as a motif of its own. “Assassination” is the first action cue, a tense piece with panpipes and a wordless male choir adding some color. “Surrender of Peace” and “Death of Gorkon” use woodwinds, synthesizers, and the dark rhythmic motifs to represent the aftereffects of “Assassination.”

After some more short dark tracks, Eidelman switches over to the penal planet Rura Penthe. These cues are among the highlight with some unique instrumental choices. “Rura Penthe/First Sight of Penthe” uses panpipes and percussion rattles to represent Kirk and McCoy’s arrival at the prison. This track is notable for its Klingon chant (1:05), set to the motif form “Guess Who’s Coming.” The Klingon language has actually been fleshed out and made functional thanks to the power of Star Trek fandom, so the male voices in this cue actually are legitimately saying “To be or not to be” in the alien tongue (Christopher Plummer’s wonderful eye patch-wearing Klingon General Chang has a propensity for quoting Shakespeare and this is one of his favorite lines). “Alien Fight” builds on the percussion from “Rura Penthe” to create a short action cue.

The Conspiracy motif builds to a swelling performance in “First Evidence/The Search,” quickly followed by the Klingon motif. “Escape from Rura Penthe” is a lengthier suspense/action cue. It starts off as sneaky music, with lots of panpipes and percussion. At 1:21 the percussion gradually builds up speed. At 2:17, descending and abrupt panpipes slow things down and the music takes a decidedly more serious turn. Spock’s theme appears on horns (3:05) and gets a full-on wonderful performance starting at 3:30. Spock does not actually appear in this scene, but Eidelman’s saw a rare opportunity to release something sweeping for a vista shot and found this to be the best candidate for his purposes.  Four minutes in the track goes back to a more suspenseful route, with some dramatic strings to close things out.

Spock’s theme opens up “Revealed.” The accompanying synthesizers remain as Eidelman gives the Conspiracy motif more play. The Klingon motif appears towards the middle and the Conspiracy motif drones on for the remaining time. “Mind-Meld” is the latest of the franchise’s mystical Vulcan cues. Spock’s theme is there on synthesizers of course. Eidelman does differentiate his mind-meld music from his predecessors by using deeper instruments in the surrounding ambience. The Enterprise theme makes what is only its second appearance so far in “Dining on Ashes.”

“The Battle for Peace,” identified as three separate cues on the complete score, is an eight-minute track that accompanies the film’s space battle. The early proceedings are dominated by harrowing performances of the Conspiracy motif. The track builds up steam with an attack from the Klingon motif (2:24). For its first half the track is not a full-fledged action tour de force. Instead Eidelman has suspenseful passages punctuated by bursts when one of the combatants fires. After a subdued iteration of Spock’s motif (4:00), the music escalates with a pounding rhythm and French horn bursts. Eidelman uses the Conspiracy and Klingon motifs’ rhythms as driving forces until 6:41, when a brief fanfare breaks out. There is one final iteration of the Conspiracy motif as the heroes rush to stop another assassination.

“Sign Off” breaks free of the domination by the darker motifs. It begins with the Enterprise theme and then some bittersweet string music. Courage’s fanfare appears on a lone defiant horn (0:55) and the Enterprise theme returns. Courage’s fanfare makes a second appearance, this time building into a heroic melody and the Peace motif on horns (2:09). “Star Trek VI End Credits Suite” is a great ender. As some of the motifs sound a bit like underscore, this track really helps define them. The first act is a dramatic mix of the Enterprise and Peace themes. Next up is Spock’s theme. This builds into the Conspiracy motif. As the Conspiracy and Klingon motifs churn about, the Peace motif joins in as a dramatic counterpoint. At 5:50 the Enterprise theme, accompanied by sparkling instruments, finally breaks out for a triumphal conclusion.

Reviewers really love Eidelman’s work on Undiscovered Country. I actually find myself to be in the minority here. For the purposes of the film Eidelman does a good job. His dark music is great at conveying the conspiratorial nature of the plot. While the film has plenty of humor, it reminds the audiences that there are serious stakes involved. The problem, especially with the expanded score, is that the barrage of dark material doesn’t exactly make for the most engaging listening experience. On the expanded album some sections can get downright dull. Aside from Spock’s theme, the identities for the heroes are very under-used and disappear completely between the opening and closing acts. This is the type of score that’s great on a technical level, but suffers on the memorability factor. It’s more rewarding for film music lovers who can pick out all the musical choices in terms of motif and instrumentation. Despite my love for the movie, this is one score I don’t come back to that often outside of the end credits suite.