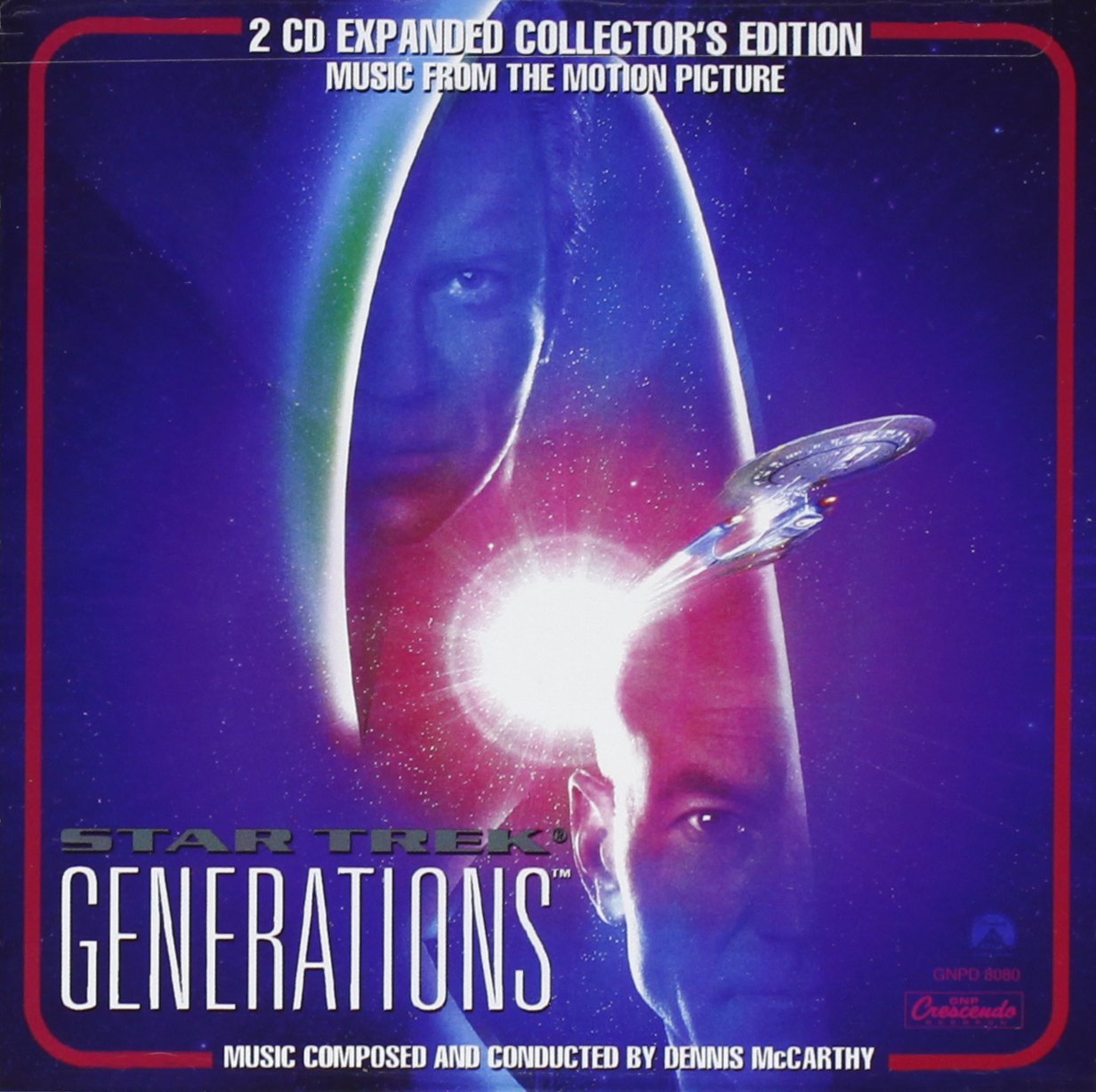 Though the original cast had their full ensemble send-off with Undiscovered Country, Paramount still wanted more Star Trek movies and would get them with the Next Generation cast. In 1994 Star Trek: The Next Generation finally wrapped up so it was time to get Captain Picard, Data, Worf, and the rest of the gang onto the big screen. Generations, coming out later in the same year, would be a passing of the torch, with a plot that would literally enable Kirk and Picard to meet. Soran, a human-like alien with an incredible lifespan, is attempting to enter an otherworldly plane called the Nexus. By forcing it open he would endanger space and time. Picard, reeling from the deaths of his brother and nephew, tries to stop him. Also, Data installs an emotion chip and goes wacky while some Klingon villains from the show get involved. It’s not the best film, with some questionable plot holes. The long-awaited team-up between Kirk and Picard occurs far too late, leaving no time for them to play off each other with their combined experiences as captain of the Enterprise.

One reason for Generations’ writing flaws can be chalked up to an unwise production schedule. The film was written by Ronald Moore and Brannon Braga, both seasoned writers of the TNG show. They had already spent much of their creative energies on the show’s season finale and did not have time to flesh out and fine-tune the movie script. The director himself, David Carson, was a veteran of the show, having written some of its most acclaimed episodes. Interestingly the choice of composer was also a carryover from the series. Dennis McCarthy was the primary composer of all the 80s and 90s Trek shows. To be honest I never found his television work all that stellar. The few pieces that I can remember are those that are reused constantly through hundreds of episodes. Film score reviewers also seem to find his sole film outing to be underwhelming so I was interested to explore this score further and see if such criticisms have merit.

There are two album releases. The original album contains a little over 40 minutes out of 75 minutes of score, and bizarrely nearly 20 minutes of sound effects. The expanded album fills in the missing material, but also has one chronological distinction. “Star Trek Generations Overture” starts the original album, but ends the complete edition. This is because it’s actually not an overture, but the end credits music. By using it as an overture on the original release, McCarthy probably intended to showcase his two major thematic ideas. The first is an uplifting heroic melody that serves as the main heroic theme. It is really two themes. The initial fanfare in the overture is the first part of a theme for the Enterprise. McCarthy does have an expanding melody that arises from it in such cues as “Two Captains” and the ending of “Prisoner Exchange.” The following part in the overture, the Generations theme, doesn’t appear that much until the last act with “Jumping the Ravine.” It can be seen as a Captains theme since it usually appears alongside Kirk and Picard scenes. It has some similarities to the soft emotional music from the TV series, but can be quite stirring when infused with more energy. These two heroic identities work, though they lack the memorable punch of many of the other main heroic themes from the series. Apparently McCarthy had the option to use Jerry Goldsmith’s themes. Goldsmith’s Star Trek theme had been used to open and close TNG’s episodes so it would have made sense. McCarthy felt it would be inappropriate for him to utilize it and so refused, unfortunately, to reference any pre-established themes outside of Alexander Courage’s fanfare. Said fanfare appears fairly often in the opening and closing acts, serving as a nostalgic callback signature when Kirk is onscreen.

The other major new theme is an ethereal piece for the Nexus (1:38). Synthesizers and choir effectively convey the dream-like atmosphere of the other dimension, warm but not quite real. Outside of the Overture there is a generic four-note motif for the villain Soran (introduced right at the start of “Main Title”). Soran’s motif is easy to miss thanks to its simplicity and can often be confused as part of the underscore. These two themes often work together as Soran is obsessed with opening the Nexus.

Despite some serviceable themes, McCarthy’s overall score falls flat. He can do decent music for character scenes and bursts of heroism, but his action and suspense is very lacking in comparison to the works of other composers on the franchise. Though better than what was on the show, they lack the orchestral depth of his predecessors. One of the hallmarks of Star Trek soundtracks, which Leonard Rosenman also failed at with The Voyage Home, is the creative selection of instruments to give an alien edge. Outside of the dreamlike textures of the Nexus theme, McCarthy offers nothing aside from the clicking percussion that opens “Prisoner Exchange.” Since much of the music between the major thematic statements is generic, I don’t feel the need to rundown the whole album but point out a few highlights.

Surprisingly, McCarthy does not utilize his new major theme for “Main Title,” aside from a brief reference of the opening motif at 1:18. He instead relies on the Soran and Nexus themes. This accompanies a bottle floating in space and creates an ethereal atmosphere for the opening. This is the most low-energy opening cue of the franchise. At the end it finally swells into Courage’s theme for the reveal of Enterprise-B. The setting is in Kirk’s time, with the retired captain visiting the successor to his classic ship. As a result the cues “Past Glory” and “The Enterprise B” continue the glittering atmosphere with more nostalgic references to Courage’s theme and pieces of the Generations theme. The first full appearance of the Generations theme occurs in “Kirk Saves the Day/Deck 15/HMS Enterprise.” Here the theme is backed by determined percussion as Kirk finds himself called into action once again. After some pounding action the music gets somber with a nobly reflective take on the Generations theme. The last part of the track sees a transition to Picard’s time with a noble statement of the Generations theme.

One of the better action pieces is track 16, which has a long title that I won’t bother typing here (it’s six cues merged together). It has enough frenetic energy to garner some attention, though it lacks any identifiable themes. This is soon followed by “Christmas Hug/The Kitchen Debate,” an eight-minute long ethereal piece built on the Nexus theme. It stands out for its sustained ambience. “Jumping the Ravine” is an idyllic and energetic performance of the Generations theme. At 1:16 the theme partly reprises with a choral undercurrent. After a generic “The Final Fight,” McCarthy provides an emotional resolution with “The Captain of the Enterprise” and “To Live Forever.” Both feature the Generations theme and a conclusion with the Alexander Courage theme. These are good tracks, providing some heartwarming goodness.

Generations is ultimately too much like McCarthy’s work on the show. There’s a strong central theme, with a couple decent secondary identities, but everything around it is just too generic and non-distinctive. If one were to buy the music, I’d definitely recommend the shorter, tighter album which does focus more on the themes.