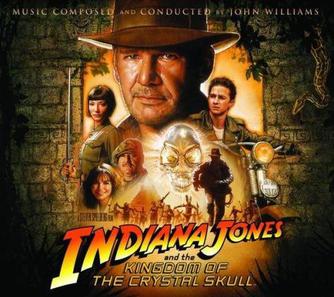 One of the most exciting aspects of Indiana Jones coming back was the return of John Williams, who at this point had just started to take it easier with his movie scoring schedule. As with his return to Star Wars, much time had elapsed since he scored Indiana Jones. Would his changed style of scoring affect how fun the score would be? END_OF_DOCUMENT_TOKEN_TO_BE_REPLACED

Although Temple of Doom was another box office hit, critical reactions were heavily mixed and it obviously affected director Steven Spielberg enough that he spent a couple extra years on completing the Indiana Jones trilogy. He wanted to recapture more of the feeling of Raiders of the Lost Ark, resulting in the return of a couple supporting characters and the use of Nazis as the villains. Originally the third film was going to focus on Indiana Jones looking for fruit of immortality and the legendary Chinese character the Monkey King in the heart of Africa, but this was wisely replaced by a search for the Holy Grail with Indy’s own father, wonderfully played by Sean Connery, thrown into the mix.

John Williams of course returns with a lot of new themes. There are a couple of artifact themes this time around, both evoking a strong religious feeling, without any of the ominous feeling of the other movies as the healing power of Christ isn’t known for  zapping anybody who tries to use it. The first is the primary Grail theme, which appears in the travel cue portion of “X Marks the Spot.” Most of its appearances were absent on the original album, but restored on the 2008 release. There’s a secondary Grail theme which is also used for Henry Jones Sr., Indy’s father (as evidenced by its use in Kingdom of the Crystal Skull). This warm theme makes its first appearance in “Ah, Rats!” after a statement of the primary theme and is heavily present in the film’s last cues. There’s also a small family motif which appears towards the beginning of “Canyon of the Crescent Moon” and in more loud fare in “Keeping Up with the Joneses.” END_OF_DOCUMENT_TOKEN_TO_BE_REPLACED

Until Kingdom of the Crystal Skull, The Temple of Doom was regarded by most as the weakest Indiana Jones flick. The love interest is annoying, juvenile humor abounds in some scenes, and there was perhaps a little too much dark elements, creating the PG-13 rating. Still, Spielberg’s worst movies are still a cut above most other films and aside from the whipping scene I don’t think it’s too much darker than the other ones, which had their fair share of skeletons and grisly deaths. This time Indiana Jones adventures in South Asia, seeking the Sankara stones and fighting an evil Kali cult along the way. John Williams crafts a fine follow-up to his Raiders score, though the music feels much lighter this time around. The Temple of Doom is the most enthusiastic musical entry in the series, with several themes continuously popping up in racing action cues. END_OF_DOCUMENT_TOKEN_TO_BE_REPLACED

With Star Wars hearkening back to old-fashioned sci-fi pulps and serials, the Indiana Jones franchise is likewise based off of adventure serials and film from the 1930s-50s and in fact take place in that era. Created by Steven Spielberg and George Lucas, Raiders of the Lost Ark, the first Indiana Jones film, was a smash hit that cemented Harrison Ford as a movie star, furthered the popular use of Nazis as villains, and, as with almost every Spielberg movie, produced an amazing John Williams score. The Indiana Jones theme itself is one of the most recognizable pieces of movie music, and is often referred to as the Raiders March, after the first film it appeared in.

The Indiana Jones theme is actually two heroic themes that, at the insistence of Spielberg, were mashed together. More recognizable and hummed much more is the first part of the theme, which plays at the outset of “Raiders March”. It’s instantly catchy and is used much more than the second part. I’ve even heard some makeshift lyrics for it (“Indiana, Dr. Jones, Indiana, Dr. Jones, Jones, Jones”). The second part itself always begins the final statement of the theme in the end credits suites. What’s interesting about Indy’s theme is that it doesn’t make its first appearance until the end of the opening sequence in “Escape from Peru”. END_OF_DOCUMENT_TOKEN_TO_BE_REPLACED