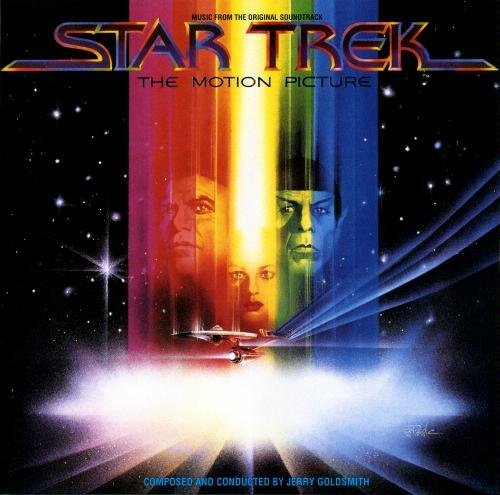 In 1979, Gene Rodenberry was able to bring back the cast of his space sci-fi show Star Trek, this time as a movie. Production actually started before Star Wars became a phenomenon, so there was no pressure to create a popcorn action flick (J.J. Abrams would commit this franchise sin thirty years later; also, Star Wars probably did help drive up attendance numbers for Star Trek). Unfortunately, Rodenberry and director Robert Wise went too far in the other direction, creating one of slowest mainstream franchise films of all time. Star Trek: The Motion Picture sees James Kirk, now a Starfleet Admiral, reunite with Spock and the rest of the original characters on the Enterprise. He oversees the investigation of a powerful destructive entity named V’Ger (alternatively spelled Vejur in the tracklisting) that is heading for Earth. Their investigation yields some surprises and also enables the characters and moviegoers to contemplate the definition and nature of life. It’s not a terrible movie. In fact it’s admirable that the cast and crew attempted to create a cerebral big budget sci-fi film, something that could almost never be achieved today.

The composer who would score Star Trek’s entry into cinema was the highly regarded Jerry Goldsmith. This would prove to be one of his most well-known scores, with a couple themes that would permeate the franchise going forward. The film’s plot is not enough to sustain a two hour running time and features several long sequences of the Enterprise being explored and doing exploring. While these scenes drove many moviegoers out of their minds with boredom, they provided an enviable chance for any film composer. With long, slow, dialogue-light sequences, Goldsmith was able to create powerful, lovely cues that could work wonderfully as standalone pieces of classical music. Goldsmith claims that he saw space as a place of romantic potential and, in contrast to the militaristic orchestration of Star Wars and its knock-offs, utilized more in the way of piano, harps, chimes, and similar “soft” instruments. Goldsmith also utilized a fair number of electronic elements in his score. Among these is the blaster beam, a musical instrument patented by none other than Craig Huxley. Huxley portrayed Kirk’s nephew on the TV series. This instrument sounds like an electric instrument, but is really a complex string instrument involving an empty shell casing. The blaster beam is heard in some of the cues focusing on V’Ger, adding to the unusual alien menace of the main antagonist. The use of the blaster beam, electronics, glass tubes, and ominous rhythms make for a decidedly alien musical palette. END_OF_DOCUMENT_TOKEN_TO_BE_REPLACED