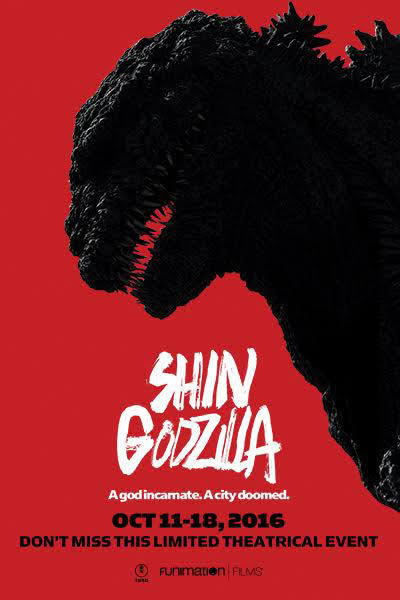 The people at Toho Studios ended their third run of Godzilla films (the Shinsei series) with the ludicrous 50th anniversary bash Godzilla: Final Wars. Deciding to take a break from the Godzilla series for a while, mainly due to declining public interest, any notions of returning to the franchise were probably put on the backburner once the American Legendary Studios started production on their own film. With the 2014 Godzilla revitalizing interest in Japan, a new film was put into production. It is a delight to see that Toho has brought back one of my favorite franchises. The American film was enjoyable and had some awesome moments, but attempts to hold back on showing Godzilla and focus on an uninteresting human made for a frustrating experience. Shin Godzilla is a reboot, with no connections to any of the other films. In fact, it is the first Toho Godzilla movie to not be in continuity with the 1954 original.

The movie has two directors Hideaki Anno and Shinji Higuchi, with the latter focusing more on the special effects end. Both also worked on the anime Neon Genesis Evangelion, which I have never seen but now have a bit of interest in after seeing this movie. While the first Godzilla film was made as a response to the atomic bombs and some disastrous side effects of nuclear testing, this film is more interested in responding to the political and global reactions to the 3/11 earthquake and the Fukushima incident. The movie has a lot of political characters, and shows in-depth their discussions and response to the Godzilla threat. This is the part which may turn off American viewers. Though having little knowledge of how the Japanese government works, I personally was fascinated. Shin Godzilla acknowledges that the Japanese Self-Defense Force has never actually had to defend its shores, so this is their trial by fire. The Japanese characters make cynical, snide remarks about the UN and American foreign policy. But with all the boardroom meetings and discussions on geopolitics, I doubt that this is the type of movie you want to bring kids to, as there are lots of scenes of people talking in rooms or hallways. There seems to be aspects of satire to the political scenes, especially when the military is handicapped by an indecisive Prime Minister. The audience I saw it with actually chuckled at a lot of the lines.

One pleasing aspect is that the film involves the entire world. One of the problems with the Godzilla series has always been that the many world powers seem uninterested in the destructive behemoths assailing Japan. Sure, there were exceptions, such as the occasional American member of G-Force in the 90s films, but otherwise it seemed that Japan was always on its own, while the military superpowers of America and Russia seemed too lazy to at least send an aerial strike or naval bombardment. Here the whole world is invested in what is happening, naturally scared of what Godzilla can do once he’s through with Japan. The Americans even send in a bomber strike in one scene after the Japanese SDF fails. A warning to American viewers, there are some critical comments made towards the United States, especially in how it tries to intervene in Japanese affairs. One of the messages of the movie is that Japan needs to lead the fight in her own battles, instead of relying on America or the UN to bail them out. As one character says, must Japan always be “post-war”, a glorified American protectorate?

There are dozens of characters, so very few get fleshed out. Almost all their dialogue is on the current political climate or Godzilla. Most are just the various government officials, but there is an independent group led by the male lead that features some quirky people. The male lead is the Deputy Chief Cabinet Secretary Rando Yaguchi, played by Hiroki Hasegawa (I had to look up his actual position, since it was difficult to keep up with all the roles). He is a competent character frustrated with the red tape and bureaucracy, so he forms his own team to find a way to defeat Godzilla. He doesn’t show too much emotion, but it’s effective when he does. American viewers will take a special interest in the US ambassador, Kayoko Ann Patterson (Satomi Ishihara). She’s a Japanese-American diplomat amusingly played by a Japanese actress who had to learn English for her role. Seeing someone have trouble saying English lines while proclaiming her ambition to be president is certainly bizarre, and makes one realize how American actors probably sound weird when they speak non-English languages. Her character arc sees her torn between serving the United States and trying to help her grandmother’s country avert further disaster. In general the characters actually affect the plot. That’s another recurring problem with a good chunk of the Godzilla movies, where humans will go through personal drama or learn things about the monsters, but only a handful of them will actually affect the outcome in any meaningful way (except accidentally reviving or creating Godzilla’s opponent of the week).

This is a very different Godzilla film. It certainly feels larger, has a much more serious tone, and shows much deeper thinking in its plot. But nothing feels more different that the main attraction: Godzilla. Anno and Higuchi did something that’s actually hard to do with Godzilla: make him creepy. As can be seen from the trailers, this Godzilla looks nightmarish and zombielike, not a giant dinosaur who can looks like a natural animal and can be quite loveable.  He certainly looks like the unethical creation of mankind’s folly. His origin is related to nuclear energy, but he is something different than what we’re used to. I can’t say too much because of spoilers, but this Godzilla is full of surprises that come out of left-field. His first appearance is sure to bewilder viewers, and his abilities are altered in some rather unique ways. I think Godzilla didn’t really have too much screentime, like in the 2014 American version, but here the scenes don’t cut away when something interesting is about to happen. The camera stays focused on Godzilla when he does something. Also of note is that this is the biggest Godzilla. After the Americans expanded his height to 355 feet, Toho felt the need to one-up them. This Godzilla is 387 feet tall.

Shin Godzilla is a great reboot, full of interesting themes, human characters that feel integral to the plot, and a bold and different take on the big G himself. Rewatchability might be difficult, because of all the political scenes and the action’s reliance on unexpected occurrences. This is certainly one of the best Godzilla films in terms of actually being a well-made movie, not merely for its entertainment value like most films in the franchise. One concern I have is how the sequels will play out. Godzilla is so monstrous and powerful in this film that I don’t see how any other monster could be a credible threat, and I don’t think he will be kept as the primary antagonist.