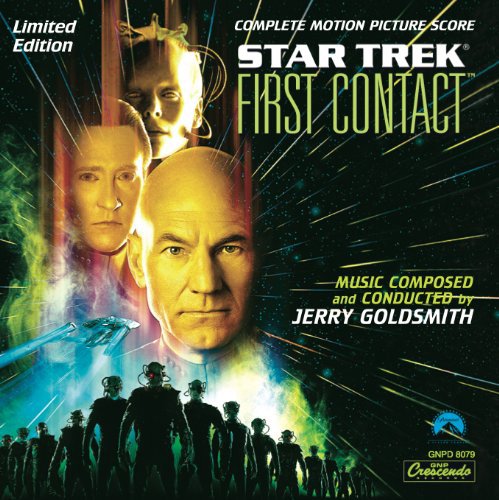 First Contact is considered to be the only truly good film starring the Next Generation cast. The plot sees the Borg mount another assault on earth. This time Starfleet is able to destroy the Borg Cube, but Picard learns that it sent out a time machine. Following it back in time, he learns that the Borg seek to prevent earth from contacting alien life and thus eliminate Starfleet as a threat in the present. The Borg overrun part of the Enterprise and the two sides have a series of fights. On the character side of things Picard’s PTSD from his previous experience with the Borg starts to cloud his judgment as he focuses on personal vengeance. I have some issues with the movie, particularly with how it portrays earth’s first contact with an alien species, but it’s definitely the best of the four TNG films. One thing that definitely works in its favor is the permanent return of Goldsmith to the franchise. The composer would score this and the next two films.

The greatest positive of Goldsmith’s longer tenure is the cohesion of the themes. Now every film would have his Star Trek theme. He would actually use it less, preferring to focus on his newer material. There’s not much in the way of new variations of the theme, but this is more than made up for by both new and other returning themes. Of the new themes, the most memorable one is the First Contact theme. It’s a lovely optimistic melody, symbolizing humankind’s ascent to the stars. Doubtlessly not wanting to simply rehash the main theme again, Goldsmith lets this theme grace the opening credits in “Main Title” (0:38). As with the main theme Goldsmith doesn’t reference it that much, but when he does it’s to great effect. Most of its iterations conclude with a familiar motif. It’s the Quest theme from Final Frontier. Recognizing its reliable flexibility, Goldsmith began to frequently pull it out in his TNG scores. One of its main uses is as an ender for the First Contact theme, where its statements are tied together by two extra notes (2:29 in “Main Title”). Finishing up the heroes’ side of things is the Klingon theme. Though the Klingons are not present as a faction in the story, Goldsmith is still able to bring back this popular melody to represent the race’s sole representative, famed character Worf. One might find it odd that one member of the Enterprise gets a theme and the others don’t, but Goldsmith’s melody is so good that listeners won’t care. It helps that as a warrior in a more action-oriented Star Trek film, Worf is constantly called upon so the theme’s inclusion is appropriate. END_OF_DOCUMENT_TOKEN_TO_BE_REPLACED