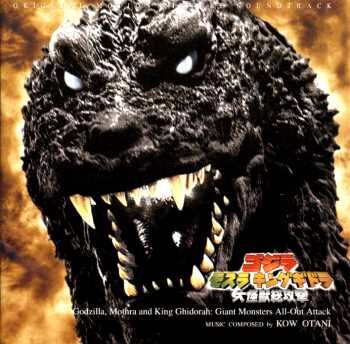 Matching the unique nature of the film is Kow Otani’s score. Otani is a frequent collaborator with Kaneko, including on his Gamera films. Kaneko’s Godzilla score is heavy on synthesizers and electronics, a stark departure from previous scores. It nevertheless works well thanks to the strength of his themes. Kaneko’s score is very thematic, with four major and a couple ancillary themes filling up almost every space. Godzilla’s theme is introduced forebodingly at the very start of the album. It makes its first full fledged appearance at 0:15 in “Main Title.” Matching the Big G’s most villainous portrayal, it’s decidedly more sinister than his other themes. One unusual appearance of this theme is “Escape from Godzilla,” where it starts off powerful and menacing, but then literally fails (this makes sense if you see the scene it accompanies). END_OF_DOCUMENT_TOKEN_TO_BE_REPLACED