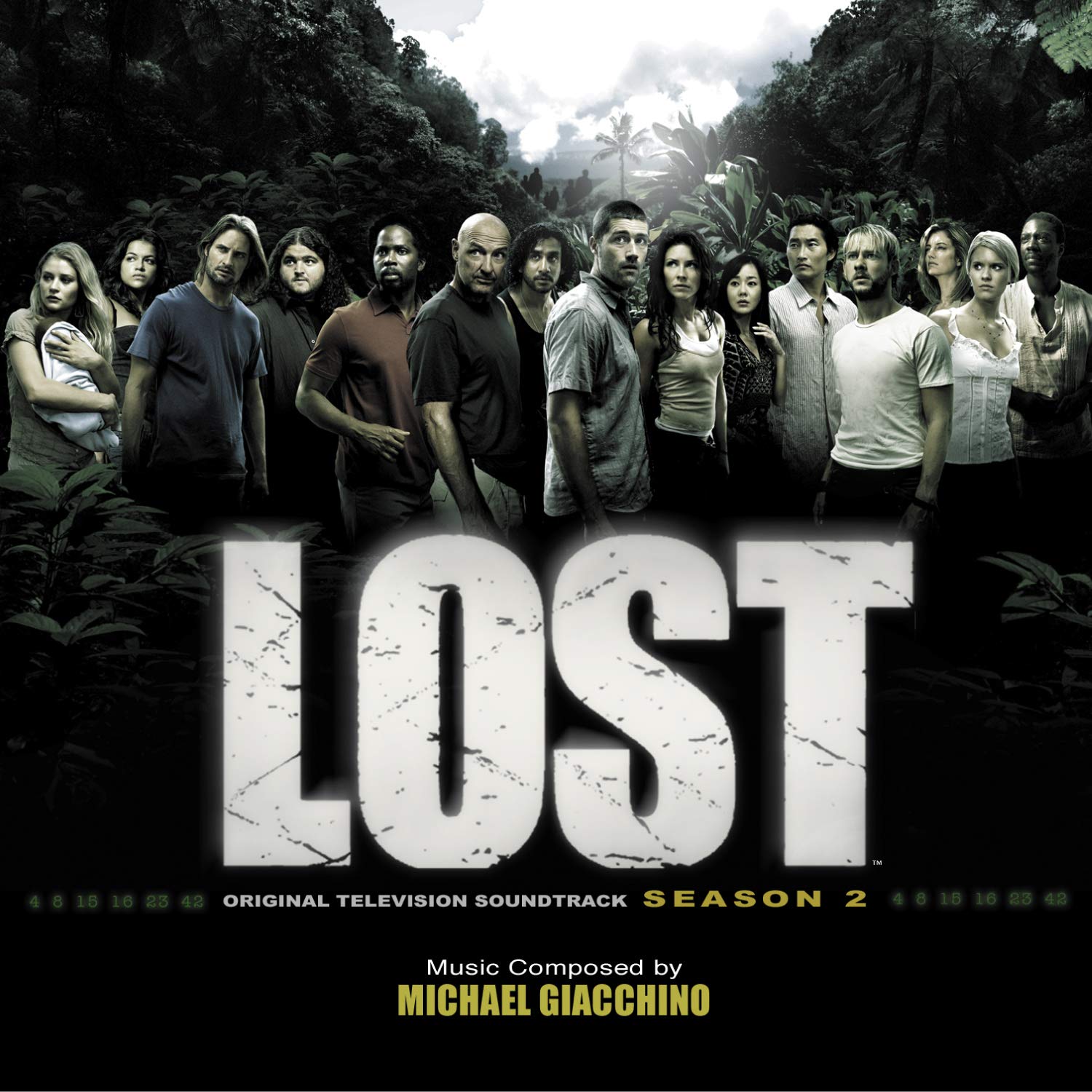 The second season of Lost was a strong continuation of the show. Like the first season it focused much on the characters’ efforts to survive. But it also sees the character relationships start to cement, for better or worse. Also the island’s mysteries remain far out of reach, but elements of its past are slowly revealed through the discovery of the Hatch, an underground facility with a dark secret. Another major element is the discovery of another group of survivors from Oceanic 815, but thanks to circumstances involving the actors this didn’t amount to much in the long run. Michael Giacchino also continued his strong run, further developing his network of themes and motifs. The score as heard on album, however, is lacking in several areas.

One of the major issues is actually with the season itself. It’s not bad, but there are far less smoke monster and polar bear chases and the show hadn’t reached the point where shootouts became a common recurring feature. As a result the album moves rather slowly despite the quality of the compositions. The emotional character themes are almost exclusively broken up by dark suspense. Again the music is good, but the album flow suffers as a result. Ironically the second issue is related to the themes. The producers of the season 2 album seemed to prioritize establishing the various character themes. It catches up on ones that were introduced in season one, but absent from the first album, including those for one-hit musician and drug addict Charlie (“Charlie’s Temptation”), overweight comic relief Hurley (“World’s Worst Landscaping”), former Iraqi interrogator Sayid (“A New Trade”), and rich step-siblings Boone and Shannon (“Shannon’s Funeral”). There’s also a plethora of new character themes for Nigerian priest Eko (“All’s Forgiven…Except Charlie”), Korean couple Sun & Jin (“The Last to Know”), Scottish Desmond (“Bon Voyage, Traitor”), two more themes for Hurley (“Mess it All Up” and “Hurley’s Handouts”), and loveable old couple Rose and Bernard (in the track of the same name). In a 65 minute presentation the multitude of themes ensures that no theme or themes, such as the trio of strong identities on the first album, provide a cohesive framework. The album as a whole works better as part of a vast musical experience encompassing all ten discs rather than a stand-alone piece.

The one theme that manages to appear in the opening, middle, and final acts of the album is the Main Mystery theme. It has a notable presence in the two important cues “Peace Through Superior Firepower” and “I Crashed Your Plane, Brotha” and appears in its accelerated horror string variation in “Charlie’s Dream.” The most important development for the theme is “End Title.” First appearing on the season one DVDs, this half minute end credits cue puts the Mystery theme through quick ominous paces before signing off with a snarling trombone (the passing airplane effect). The main Lost theme is prominent in the first half. It has a very brief iteration at the beginning of “The Final Countdown,” a stirring tragic presence in “Just Another Day on the Beach,” a simpler reprise in “Ana Cries,” and another sad version that interplays with Boone and Shannon’s theme in “Shannon’s Funeral.” Afterwards it completely disappears. To be fair there were no versions of this theme from later in the season that really screamed for album space. The famous Life and Death theme is completely absent (as I believe it is from season two’s music in its totality).

The album has a strong opening. “Peace Through Superior Firepower” is incredibly harsh, with almost grating strings and dense metallic percussion. In a throwback to the end of the first album, it ends with the Main Mystery theme, this time laden with deep percussion. “The Final Countdown” begins in a flashback scene with the Lost and Emotional Locke themes providing the first character moment. The rest of this lengthy track is a tense interplay between two motifs for the Hatch. Primal percussion continues throughout, accelerating along with the string material as a clock ticks down. The countdown is resolved, but the track goes on with Locke’s Spiritual theme.

A trio of tracks present an equal number of themes for Hurley. “World’s Worst Landscaping” is a comedic chase cue implementing the character’s equally humorous motif from the first season. “Mess it All Up” is the character’s tragic theme. While somber, it’s not as dramatically sad as the other characters’ tragic melodies. “Hurley’s Handouts” is a guitar-driven cue for one of the happiest scenes of the show. This presents Hurley’s most emotional theme, which bears some similarities to the Raft theme from the last album’s “Parting Words.” In one season Hurley went from having a very simple comic identity to having a musical identity as rounded as his wide girth.

The next set of tracks deals with the Tailies, a smaller group of survivors that provided new characters to explore. The first three are from a flashback-only episode that shows what they were up to during season one. “Just Another Day on the Beach” is a harsh horror cue with discordant string work. It ends with an aforementioned tragic version of the Lost theme. “Ana Cries” further uses this theme. “The Tribes Merge” is a simple harsh collection of metallic bangs mixed with dark strings. “The Gathering” is a reprise of “Parting Words,” though it doesn’t build to the swelling, hopeful heights of that standout track.

“Shannon’s Funeral” (sorry for the spoiler) provides the last appearance of the main Lost theme on this album. After that it’s a trio of cues linked to Charlie. “All’s Forgiven…Except Charlie” features Eko’s theme. After a peaceful string introduction it uses the guitar instrumentation from “Hurley’s Handouts” for another montage sequence. About four minutes in Giacchino starts to repeat two notes over and over, increasingly turning these two notes from a peaceful endcap to dark foreshadowing. This part of the track is interesting, but not particularly great to listen to. “Charlie’s Dream” reprises “Charlie Hangs Around,” but with a disturbing piano melody while Charlie’s Temptation” is a simple iteration of the character’s somber theme.

The next few tracks mostly focus on more character themes. Sayid’s theme in “A New Trade” is very sad and remorseful while Rose and Bernard’s love theme is sweet and heartwarming. “The Last to Know” presents, for the first time, Sun & Jin’s beloved theme. In their first episode Giacchino used Asian-flavored accents and the main Lost theme for their flashbacks. Here he ditches the ethnic accents (fitting as he never used African drums for Eko or a duduk for Sayid) and creates the series’ most enduring love theme. Mixed in with these tracks are two suspense cues. “Mapquest” is a short cue that introduces a creepy Trek motif on harp. “Claire’s Escape” is much longer and full of start-stop suspense, but doesn’t offer much interesting.

The tracks from the finale, “Live Together, Die Alone,” are split into two sections. Those for the final conflict in the Hatch have a dank feel. “Toxic Avenger” is an eerie piece that utilizes airplane parts percussion. “I Crashed Your Plane, Brotha” builds suspense through escalating strings and harsh metallic percussion. At 0:59 the Main Mystery theme appears for one of the big revelations of the season. “Eko Blaster” starts mischievously and gets more perilous with thumping percussion.

Tracks 23-25 introduce the material for the Others, the mysterious natives of the island who start to reveal themselves. “The Hunt” starts with Giacchino’s first idea for them, a slow repeating thump that represents their stealthy antics in the first two seasons. After some tropical percussion this leads to the first album statement of the Others (later Ben) theme (0:52). This six note motif would become one of the major recurring themes of the series. Here it’s a simple signature, usually played on trombone. The track goes into eerie suspense mode with a harp motif that’s like “Mapquest” but not quite. At 2:55 Giacchino creates an echoing radar effect with what I believe is percussion. This leads to the introduction of the Finale Action theme. This theme would appear once in each finale from season 2-5. “The Hunt” has neat ambience, but is a bit too slow and moody to take up four minutes of album space. “McGale’s Navy” introduces another theme for the Others. This one is a winding identity that represents their image as semi-primitive islanders. The track slowly builds to another statement of the main Others theme. “Bon Voyage, Traitor” kicks off with Desmond’s theme, or at least the melody that would come to be associated with him in season three. It’s a dramatic piece that begged for further development and got it. Around 0:40 the track goes back to the Others with their two themes. After some long string notes Desmond’s theme repeats on violin (2:37). The rest of the track builds up (with some eerie ghost sound effects) to a final bombastic statement of the Others theme and a cliffhanger.

The soundtrack for season two has a lot of good music, but doesn’t quite come together as a particularly engrossing listen. It needs one or two strong themes to anchor all the music together and the abundance of dark and eerie suspense in between the character themes is a little much. Perhaps a full disc presentation with at least 10 more minutes of music could have solved this problem. Fans of the show will still enjoy this album. I can’t see any non-fans, however, enjoying this. Fortunately, with the expansion of concepts in future seasons, Giacchino would have the opportunity to carry his music to new heights. I find myself in the odd position in giving a low rating for good music. At least season two’s album sets up a bevy of themes for further development.